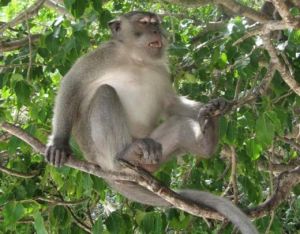 A farmer in southern Nepal mistook his son for a monkey trying to steal his crops and shot the 12-year-old dead, police said on Sunday.

Chitra Bahadur Pulami had been climbing a tree to chase away macaques that had become a nuisance to the family but his father Gupta Bahadur, 55, spotted the boy and opened fire, wrongly believing him to be one of the animals.

“The son was hiding in a tree at their farm to chase away monkeys that used to come searching for food in the maize field,” said Arun Poudel, deputy superintendent of police in the remote Arghakhanchi district

“The son died on the spot after Gupta Bahadur mistakenly thought there was a monkey in the tree and opened fire. Our preliminary investigation shows that the father was unaware that his son had gone to the maize field to chase the monkeys.

“Both Gupta Bahadur and the gun that he used in shooting his son are now under the custody of the police.”

The three species of monkey native to Nepal, the rhesus and Assamese macaque and the common langur, are considered sacred and farmers normally try to scare them away from their crops without injuring the animals.

“I realised my mistake only when my son fell down and got stuck in one of the tree’s branches,” the farmer was quoted as telling police by the Nepali nagariknews.com website after the incident, on Friday.
Posted by Unknown at 19:54