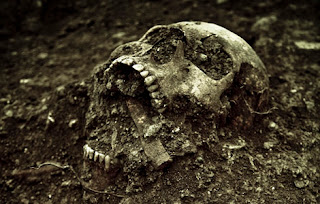 The Ogun State Police Command, on Tuesday, arrested a middle-aged Pastor, Michael Oyewole, and his accomplice, Matthew Akiode, for being in possession of a human skull, which they allegedly exhumed from a grave at Sabo, Abeokuta North Local Government Area of the state.

The 32-year-old man, who claimed to be a pastor at Ona-Ara Mimo Cherubim and Seraphim at Olomore, few kilometres away from the crime scene, however, denied involvement, while Akiode, who confessed to the crime, attributed his action to the economic situation in the country.

“I used to work on his (pastor) site but he said I will make more money if I can get him human skull. So, I felt it was an easy way of making money, and that was why I did it,” Akiode said.

“I am surprised he is denying all of these, when he was the actual person that taught me how to go about it.”

Oyewole, however, insisted he was a man of God and pastor at Irewole Cherubim and Seraphim Church, Car Wash area, saying he heals people with God’s name and not with human skull.

The Police Commissioner, Ikemefuna Okoye, while parading the suspects at the force headquarters at Eleweran in Abeokuta, said the accused persons committed the offence at about 12 a.m., adding that the police acted swiftly when they received information that someone was digging open a grave.

“He never knew that eagle eyes were watching him in the process of removing the corpse,” he said.

“We apprehended him immediately he severed the head from the body and he told us that it was one Pastor Oyewole that sent him.”

The police Commissioner said the accused persons would be charged to court as soon as investigation into the matter is concluded, and urged members of the public to go about their lawful business without fear.