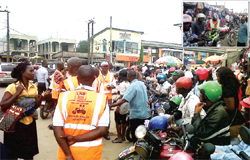 While the law regulates driving and prescribes punishment for traffic offenders, the most affected by the law seem to okada riders.

The law does not only restrict their operations on major highways and roads, it contains other stringent measures to make them respect traffic signs.

But the riders have continued to operate as if the law was meant for other people and not them.

The Commissioner for Transportation, Mr. Kayode Opeifa, said a massive campaign had been done to bring the law to the doorsteps of the residents of the state, including the okada riders.

However the riders said they knew that they law is existing, but unaware of their roles to make it work.

In Ogba, okada riders said the awareness on the law was inadequate as they did not  know its provisions and when government would embark on its implementation.

At one of the  parks in Ijaiye-Ogba, riders told one of our correspondents that most of what they know about the law had been through rumours.

Chairman of the riders association at the park, Mr. Akan Obong, said, “We heard about some of the provisions of the law through friends who have claimed to have seen the papers government officials distributed in some parts of the state.

“I really feel they should do more awareness because it would not be appropriate if they start arresting us for unknown offences.”

Another rider, Mr. Johnson Adeola, said he had been following stories written about the law in the newspapers.

“We heard they distributed bills, but I have not seen any. There may be a lot of other things in the law, which we may not be aware of. This is why they need to do more awareness,” he said.

Our correspondent noticed however, that more okada riders and passengers in the area use helmets than in the past.

Some of them said they had to use helmets because they were not sure if the enforcement of the new law had started or not.

At the okada park at Ogba Bus Stop, officials of the Motorcycle Operators Association were seen distributing bills to members.

One of the officials Mr. Ojede Oladun said the task force was saddled with the responsibility of sensitising the association’s members about the provisions of the law.

In Ketu and Anthony areas of the state, the riders urged the government to postpone the enforcement of the law.

They said they were not yet acquainted with the provisions in the new law.

A motorcyclist, Kayode Onakomaya, who operates in Ketu, said the awareness campaign on the provisions of the new law was grossly inadequate.

He said, “In our park in Ketu, we have not seen the officials of the state government doing anything as regards educating us on it and I am not familiar with the roads we are not expected to ply.

“There are so many controversies surrounding the law as it affects commercial motorcyclists. For example, here in our locality, someone said apart from the highways there are some streets that we are not expected to ply, but we don’t even know these streets and if there is an element of truth in this.”

Another motorcyclist in Anthony area, Lukman Idris, said it would be unfair for officials of the state government to start arresting and prosecuting people who break the law without proper enlightenment campaign.

He said, “It is important for government to take its campaigns to all Lagosians. It would be unfair to us if the government starts the enforcement without mass education.”

An Okada rider in Pako area of Iyana Ipaja, Nicholas Ngorom, however, said the association had taken the burden of enlightening its members on the new law.

He said, “Since the government officials are not forthcoming, those who have the knowledge of the law in our association have made it a point of duty to educate us.”

Some of the riders said the restriction on their operations on the expressways was an avenue for traffic officials to extort them.

They said the behaviour of some operators might have given cause for concern, but urged the government to make money from them.

A cross-section of okada riders said they heard the news through the mass media but that they were yet to understand the law.

An okada rider, who operates on the Lagos-Abeokuta Expressway, Mr. Wisdom Alika, said the law was not fair to them because the economic realities in the country had forced most of them to go into okada business.

He challenged the government to provide employment for them  if it was bent on “removing food from our tables by the restriction on expressways.”

Alika said, “The whole thing is politics. While seeking re-election, Governor Babatunde promised us that he would not restrict our movements. Now, he is reneging on his promise.”

He urged the government to leave okada riders alone and concentrate on governance.

Also, Segun Wale, who plies the same route, said the law was a mere lip service.

Wale said, “How do you expect the law to work when traffic congestion on most routes has not been addressed?  I feel it is one of those laws meant to create an avenue for enforcement officials to fleece okada riders.

“I suggest the government should evolve a better mechanism to check the excesses of operators instead of placing a blanket restriction on expressways.”

Another operator at Iyana Ipaja – Iba Road, Amaechi Alidumku, said he was not aware of the law.

In Shomolu, some of the riders said although they are aware of the law, they had not started to obey it.

A rider, Linus Odibeli, said some local government officials were already using the opportunity to extort okada riders in the area.

Odibeli claimed that the state government had never done anything beneficial to okada riders despite the fact that they pay taxes.

He said, “I agree with the state government on certain aspects of the law. The only problem is who enforces it. I know that local government officials in charge of selling tickets, stickers and rider cards also arrest us for not using helmets and collect N1, 000 from errant okada riders.”

One of our correspondents, who visited the Palmgrove end of Ikorodu Road, observed a bus inscribed with Public Education and Enlightenment announcing the law to members of the public.

PUNCH Metro however learnt that the awareness campaign did not state the punishments for traffic offenders.

Some riders however told PUNCH Metro that they would continue to ply expressways and major streets since they are more profitable.

Tony Okafor, a rider in Maryland, said the traffic law was a blessing in disguise for him as he would use the opportunity to increase his charges.

He said, “Most of these traffic officials are corrupt so it would not be difficult bribing them. You know some commercial buses take the BRT lane because traffic officials compromise. Another advantage of the new traffic law is that I will charge passengers more to ply illegal routes.”
Posted by Unknown at 16:34