Presidencial visit to the easth, the second Niger Bridge 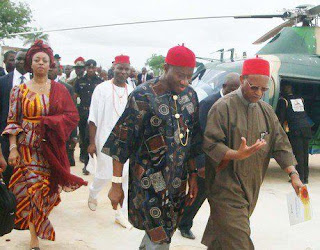 President Goodluck Jonathan yesterday announced its plans for massive road development in the Southeast, with the planned ground breaking of the second Niger Bridge in March, next year.

Jonathan, who was in Anambra State yesterday on a one-day visit, said the first Niger Bridge was built by Nigeria’s First President, the late Dr. Nnamdi Azikw
e, and that he looked forward to God to give “another Azikwe” the opportunity to build the second Niger Bridge.

The President, who addressed a town hall meeting at the Anambra State Government Lodge in Onitsha, mandated the ministers who accompanied him to give details of government plans for the Southeast.

Works Minister Mike Onolememen said:
“I want to assure you that procurement has been on for the past 10 months. Transaction approved as seven international concessionaires have indicated interests for developing the Second Niger Bridge.’’

He said each of the seven firms has the capacity and financial muscle to deliver the project, which will begin in March, next year. He said the bridge was designed in such a way that it would look like a bye pass with link roads to Onitsha-Enugu Express way and Owerri-Onitsha expressway.

The Federal Government had approved N18billion for the reconstruction of the Enugu-Onitsha Expressway and the money is ready for contractors to access and start the job, the minister said.

Finance Minister Dr. Ngozi Okonjo-Iweala promised that the money to deliver the second Niger bridge is available as the Sure P investment would be dedicated to it.

She said the World Bank has given the Federal Government $450million loan to tackle erosion in the Southeast. The loan has a 10 years grace period and 40 years repayment period with zero interest.

He promised that his administration would bring reasonable changes to the economy before the end of his tenure.

The President praised indigenous company Inter Bau limited for doing a great job at the port. He promised the company more jobs as a way of encouraging competent local companies.

Jonathan restated the government’s determination to transform the economy in all sectors, but urged Nigerians to be patient as it will take some time to accomplish the set developmental objectives.

He said the government would do the required to reduce cost of transportation by developing the key inland ports.

Anambra State Governor Peter Obi described the Onitsha port as important as it will reduce the weight which the roads are carrying and create jobs for the teeming youths.

Obi said the coming of Onitsha Inland Port marks the beginning of the rebirth of the ancient city.

He said the gateway stood as a symbol of unity in the Southeast and prayed that the cause for which the late Biafran leader was known would not die.

He said the strategic site of the statue would always bring to mind the memories of the late Ojukwu and urged the people not to allow his dream to die.
Obi said the gateway was the first point of contact with the Southeast, hence its choice for the immortalisation of Odumegwu-Ojukwu. He prayed that the statue would always touch the minds of the Igbo to think and act as one.

Amb. Bianca Ojukwu, the widow of the late Ojukwu, said she was delighted with the government’s decision to honour her late husband in a special way.

Imo State Governor Rochas Okorocha said the gateway would bind the Igbo together on sighting the statue.

At the ceremony were Senators Chris Ngige and Andy Uba, Representatives Uche Ekwunife and Victor Ogene and former Minister of Information and Communication, Prof. Dora Akunyili, among others.
Posted by Unknown at 14:24