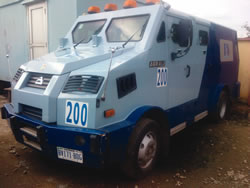 LAGOS State Government has impounded a bullion van and arrested its driver for driving against traffic.

Policemen attached to the state Taskforce on Environmental and Special Offences (Enforcement) Unit made the arrest in Apapa on Tuesday.

It was gathered on Wednesday that the government would arraign the the bullion van driver, Seun Odukoya, based on its new road traffic law.

The law stipulates a  one-year jail term without the option of fine for first offender, who drove against the traffic and three years for subsequent offender without an option of fine.

The law also says the government will confiscate the vehicle used in committing the offence.

It was gathered that the bullion van with registration number BV 171 BDG, which was arrested on Creek Road, Apapa, belong to Bankers’ Warehouse.

The van was conveying money to a new generation bank in the area before the arrest.

A police source said, “Officials of the warehouse later came with another van to transfer the money from the impounded van to the new generation bank.”

Odukoya, in a statement in  the Alausa office of the task force said,  “I drove against traffic because the road was blocked.”

According to him the new traffic law will be used to prosecute Odukoya to serve as deterrent to others.

He said, “Drivers in this state must obey the law of the land. The traffic law is not punitive but corrective.

“The court will decide the fate of the driver and the bullion van.”
Posted by Unknown at 16:33