GM To Dems & GOP: No More Cars For Your Conventions 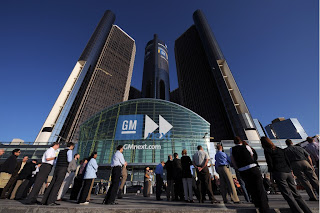 Since 1980, General Motors has provided cars to both Republicans and Democrats for their national conventions -- and it's done so free of charge. But according to a report in Detroit News, that policy has come to a screeching halt.
Typically, GM has supplied the conventions with several hundred complimentary vehicles. (Last time the groups met, in 2008, the total was about 400 cars per event.) Those vehicles are used to shuttle attendees around their respective convention cities, easing organizers' transportation worries.
And in fact, it's been smart for GM to offer those rides -- especially in 2008. After all, that was a rough year for automakers, and by late summer and fall, they'd begun making trips to D.C. to ask for government support.
But now, in 2012, things are different. GM (and its cross-town rival, Chrysler) received controversial bailout funds from the Bush and Obama administrations, and GM in particular has been dogged with the label "Government Motors" for nearly four years. Although GM hasn't explained the decision to end its longstanding car program for political conventions, we suspect that part of the rationale is to move the company away from the political arena.
Providing vehicles to the GOP, for example, might look like over-compensation, sucking up to some of GM's harshest critics. Doing the same for the Democratic convention could fuel assertions that the company is still deeply tied to the Obama administration. Nixing the program altogether gives GM a veneer of non-partisanship.
No rallies, either
That reasoning might also explain why GM and Chrysler have both prohibited presidential campaign events at their facilities. According to AutoNews, both automakers decided early this year not to host political events on-site. Though the presidential and vice presidential candidates have toured company plants, they've been asked to hold rallies elsewhere. Vice president Joe Biden, for example, spoke at a United Auto Workers hall last May, rather than from the floor of a GM factory.
Our take
All in all, it's a smart move for GM and Chrysler to stay out of the political fray. We've seen several recent examples of how polarizing companies can become when they announce support for one party platform or the other. GM and Chrysler have been working hard to dodge political bullets over the past four years -- particularly those fired by Republicans. By stepping away from each party, they take the long, high road back toward political neutrality.
That said, the automakers' employees remain free to take part in political campaigns on their own, and when they do, they seem far more likely to support Democrats than Republicans. Detroit News reports that GM employees have contributed $7,600 to Mitt Romney and about three times as much -- $21,905 -- to President Obama.
We'd be curious to hear your take on all this. Are GM and Chrysler still political hot potatoes? Will these maneuvers keep them above the fray? Drop us a line, or leave a note in the comments below.
Posted by Unknown at 14:52