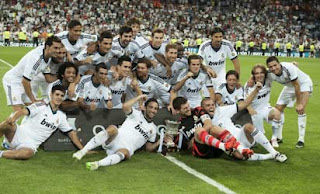 Real Madrid’s players pose as they celebrate their victory 2-1 over Barcelona at the end of the second leg of the Spanish Supercup football match Real Madrid CF vs FC Barcelona on August 29, 2012 at the Santiago Bernabeu stadium in Madrid.

With last Thursday’s first leg at Camp Nou having ended in a 3-2 Barca victory, Madrid took the title on away goals after a 4-4 aggregate draw. All the action came in an exciting first half, where Lionel Messi replied with a brilliant free-kick for Barcelona, who had previously lost Adriano to a straight red card for a last-man foul on Ronaldo.

It was a timely success for Madrid, who have already fallen five points behind arch rivals Barca in La Liga after a draw and a loss in their first two league games.

“The team went out well from the start and created chances, got the goals and then they (Barcelona) went down to 10 men,” said Madrid assistant coach Aitor Karanka.

“After all that, the result was a lot closer than we expected, but we’re happy to lift the trophy. We got a reaction from our players and that’s the important thing.”
Barca coach Tito Vilanova said he was pleased with his players’ response after a difficult start.

“I congratulate Madrid on their win, but I felt proud of our performance with only 10 men, especially in the second half, where we had five good chances to level the game,” he said.

With the tie finely balanced, both sides started with near full-strength teams.

Madrid coach Jose Mourinho kept faith with Higuain, who had scored in consecutive league games, leaving Karim Benzema to start on the bench with Luka Modric, who made his first appearance for Madrid after signing on Monday.

Barca, however, had to cope with a problem just before kick-off when Jordi Alba replaced Dani Alves, who seemed to pick up an injury in the warm-up.

Madrid were quick out of the blocks and goalkeeper Victor Valdes made a superb block from Higuain on seven minutes to stop a certain opener.

However, three minutes later he could do nothing in a similar situation after Javier Mascherano had misjudged the flight of a long ball out of defence from Pepe. Again Higuain found himself in space and this time he slotted home.

Marcelo went close before Ronaldo doubled Madrid’s lead on 18 minutes.
Again it was a long ball out of defence that troubled Barca.

This time Gerard Pique failed to clear a Sami Khedira ball and the Portuguese star pounced on the loose ball to advance on goal and finally, after a quick check-back, beat Valdes with a low shot to claim Madrid’s second of the evening.

It got worse for Barca when Adriano received his marching orders on 27 minutes for a trip on Ronaldo, who was running on to another long ball out of defence.

Barca made their first real attack of the evening in the 36th minute, but nobody was able to connect with Andres Iniesta’s dangerous cross.

Messi then struck with a perfectly curled free-kick to reduce Madrid’s lead.

The second half could not continue at the same pace and, as Barca gained more possession and settled into a more comfortable passing game, chances became rare.

Pedro Rodriguez came close to levelling for Barca on 62 minutes, latching onto a long ball only for Iker Casillas to stop brilliantly with his feet.

At the other end, Valdes saved from Khedira but Barca were controlling the game, despite the numerical disadvantage, and the home crowd was getting restless.

Those nerves were not helped on 79 minutes when Higuain’s shot agonisingly drifted to the foot of the post after beating a retreating Valdes.

Modric was then introduced to a standing ovation for his first taste of life as a Madrid player, Alex Song having earlier entered the fray to do the same for Barca.

What they both experienced was a frantic finish.

Messi came close to taking the title back to Catalunya in injury time with a shot that flashed wide from the edge of the box, but Madrid held on to trigger joyous celebrations in the Spanish capital.