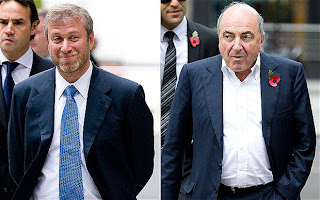 Roman Abramovich has won his $6.5bn legal battle with his former mentor and business partner, in the biggest private court case in British legal history.

The Chelsea FC owner, one of the richest and most private men in the world, was accused of black-mailing Boris Berezovsky into selling his interests in the oil company and aluminium conglomerate they founded together at a knock-down price.

Mr Abramovich in turn, accused Mr Berezovsky of extorting money from him for political influence and claimed he had paid him $1.3bn to buy his freedom when Mr Berezovsky fell out of favour with Russian president Vladimir Putin.

Mrs Justice Gloster said that because of the nature of the factual issues "the case was one where, in the ultimate analysis, the court had to decide whether to believe Mr Berezovsky or Mr Abramovich".

She said that because "both the Sibneft and the RusAl claims depended so very heavily on the oral evidence of Mr Berezovsky, the court needed to have a high degree of confidence in the quality of his evidence".

The judge added: "That meant confidence not only in his ability to recollect things accurately, but also in his objectivity and truthfulness as a witness." She announced in a lengthy summary of her judgment: "On my analysis of the entirety of the evidence, I found Mr Berezovsky an unimpressive, and inherently unreliable, witness, who regarded truth as a transitory, flexible concept, which could be moulded to suit his current purposes.

"At times the evidence which he gave was deliberately dishonest; sometimes he was clearly making his evidence up as he went along in response to the perceived difficulty in answering the questions in a manner consistent with his case; at other times, I gained the impression that he was not necessarily being deliberately dishonest, but had deluded himself into believing his own version of events.

"On occasions he tried to avoid answering questions by making long and irrelevant speeches, or by professing to have forgotten facts which he had been happy to record in his pleadings or witness statements.

"He embroidered and supplemented statements in his witness statements, or directly contradicted them."

The judge said "the burden of proof was on Mr Berezovsky to establish his claims".

She referred to his "lack of credibility as a witness".

The judge said she had concluded that "in the absence of corroboration, Mr Berezovsky's evidence frequently could not be relied upon, where it differed from that of Mr Abramovich, or other witnesses".

She added: "I regret to say that the bottom line of my analysis of Mr Berezovsky's credibility is that he would have said almost anything to support his case."

Announcing that she found Mr Abramovich to be a truthful and reliable witness, the judge said she rejected the "serious allegations" that he was a thoroughly "dishonest and cynical witness" who deliberately called witnesses whom he knew would give "as they were intended to do, thoroughly untrue evidence designed only to mislead the court".

The judge added: "Neither the evidence, nor my analysis of it, supported that allegation.

"Likewise I reject the allegation that he manipulated the trial process or engaged in improper collusion with his witnesses, or was part of a 'smears and innuendo' campaign."

The judge also ruled that Mr Abramovich did not make either express or implied threats to Mr Berezovsky with the intention of intimidating him to dispose of his alleged interests in Sibneft.

Boris Berezovsky is expected to take the case to the Court of Appeal.

In a year-long case that became highly personal, one of Mr Abramovich’s associates even accused Mr Berezovsky of sending a threatening text message to a potential witness, signed “Dr Evil”, the pantomime villain from the James Bond spoof films, Austin Powers. The message was never produced.

Mr Abramovich’s lawyers also accused Mr Berezovsky of “truly prodigious powers of self-deception” and giving evidence coloured by his “vanity and his self-obsession.”

They claimed that Mr Berezovksy was an “angry and embittered man” of “remarkable vanity and self-importance” which was “aggravated by a highly personal resentment of Mr Abramovich.”

“Large parts of his evidence can only be described as mendacious and dishonest,” they said in submissions to the court.

“He believes that Mr Abramovich has supplanted him in a position which is rightfully his and that he has acquired a sort of political influence under President Putin which he once enjoyed under a very different regime of Boris Yeltsin.”

Mr Berezovsky was once a “classic power broker” and one of the most influential oligarchs in Russia but the relationship was founded on krysha - political protection – and “the activities of a krysha or protector are inherently corrupt,” Jonathan Sumption QC, for Mr Abramovich, said in a written statement.

Mr Berezovsky "thought he had personally created Mr Abramovich out of nothing and put him in a position where he had only to sit there for vast sums of money to flow into his lap,” he added.

Laurence Rabinowitz QC, for Mr Berezovsky, had told the court that the two men had worked together during the Russian privatisation sales in the mid-1990s that followed the fall of communism to acquire an asset that would make them “wealthy beyond the wildest dreams of most people.”

In the process they “became and remained good friends” he said, but they fell out when Mr Berezovsky, who had adopted a high political profile in Russia through his control of a television station called ORT, fell foul of the Kremlin and was forced to leave the country and seek asylum in Britain.

The television channel had run a number of stories criticising Mr Putin for the failure to rescue 118 Russian sailors from the sunken nuclear submarine, the Kursk.

That, he said left Mr Abramovich in a position where he was “in effect required to make a choice - to remain loyal to Mr Berezovsky, his friend and mentor and the person to whom he owed his newly acquired great fortune, or instead, as we submit, to betray Mr Berezovsky and to seek to profit from his difficulties.”

“It is our case that Mr Abramovich at that point demonstrated that he was a man to whom wealth and influence mattered more than friendship and loyalty and this has led him, finally, to go so far as to even deny that he and Mr Berezovsky were actually ever friends,” he added.

The case rested on a number of key meetings at the end of 2000 in which the two men and a third partner, Badri Patarkatsishvili, a Georgian businessman who died at his Surrey mansion three years ago from a heart attack, discussed transferring their assets to the West.

At the second meeting, at Mr Berezovsky’s chateau near Cap D’Antibes in France, Berezovsky claimed that Mr Abramovich told him the Kremlin would remove his TV station from him if he did not sell it and prevent the release from jail of a close friend of Mr Berezovsky.

Mr Abramovich claimed there was no such meeting and the pair actually met at the French ski resort of Megeve a few weeks later and agreed to a $1.3bn pay-off.

In a last snub to Mr Berezovsky, Mr Abramovich allegedly sold his 25 per cent share of the company Rusal, the Aluminium conglomerate, for £1bn, to Oleg Deripaska, an oligarch with ties to both George Osborne, the shadow chancellor and Peter Mandelson, the former Labour spin doctor.

The sale meant Mr Deripaska owned 75 per cent of the company and Mr Berezovsky and his partner were forced to accept just £289m for the remaining 25 per cent.
Posted by Unknown at 14:31