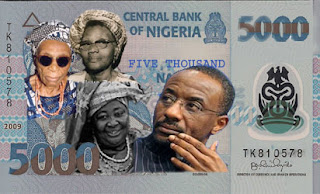 By OKEY NDIRIBe & EMMAN OVUAKPORIE
ABUJA—THE House  of Representatives Committee on Banking and Currency yesterday summoned the Governor of Central Bank of Nigeria, CBN, Sanusi Lamido Sanusi, to explain how the introduction of N5,000 notes will  promote  its planned cashless policy.

This was disclosed by the Chairman of the Committee, Jones Onyereri and his Deputy, Haruna Manu while briefing newsmen. Onyereri declared that “the House Committee will invite the CBN to know whether the apex bank is still pursuing the cashless policy, and how this higher currency note complements the cashless policy or if it contracdicts the policy what the next step should be”.

The Committee Chairman added “we believe that the Nigerian people deserve to know whether there is a short, medium and long term strategy through which the introduction of these new denominations will bring benefits to the monetary system.

“The Committee on Banking and Currency is mindful of the fact that the CBN has not communicated its plan of introducing a N5,000 note  to the committee.

“Whereas we fully respect the separation of powers enshrined in the Constitution and the Central Bank’s autonomy as provided in the Central Bank Act 2007 as amended, as well as the Banking and Other Financial Institutions Act, we have a responsibility to the Nigerian people to engage the Executive arm on issues that may have a far reaching effects on the economy, and affect the day-to-day lives of the ordinary Nigerians”.

He further stressed that “as representatives of the people, with particular oversight responsibility over the banking industry, we have set up the processes to immediately address the matter. In doing so, we will rely strictly on provisions of the Constitution of  the  Federal Republic of Nigeria,  the Central Bank Nigeria Act of 2007 as amended, the Banking and Other Financial Institutions Act, as well as other requisite legal and regulatory instruments.

“The Committee on Banking and Currency has been briefed on the cashless and wireless payment system policy of the Central Bank, which we understand is designed to reduce the actual cash in circulation while not affecting the volume of money available to citizens; this simply means cashless policy is not a monetary policy instrument used to reduce cash in circulation, as it leaves the cash available in the system unaffected while at the same time substantially reducing the volumes of currency in circulation by converting currency to electronic payment codes.

“We understand that the cashless policy encourages payment with a credit card, debit card or mobile money, which means a citizen will avoid the high risk of travelling with currency for large transactions.

Due process and rule of law

He said,”the intervention of the House is to ensure that due process is followed and rule of law adhered to. We assure you that we will also be mindful of the effect of this or any other Banking policy on the ordinary Nigerian. The following factors will thus be key to our consideration; cost of implementing the policy to government, the inflationary trend, devaluation implication and cashless policy derivative “.

“We will keep an open mind while engaging the bank management to have a full picture and understanding of the thinking at the Central Bank and reasons for this action.

“Our constituents have already inundated us with reports, petitions and write ups with arguments on both sides of the policy divide, but we believe that at this time the most effective and prudent response for the committee would be to get a full briefing on the policy from the Central Bank after which we will take a position.”

It would be recalled that the Senate Committee on Banking and Currency had last Monday stopped the CBN from introducing the new N5,000 notes.
Posted by Unknown at 16:56