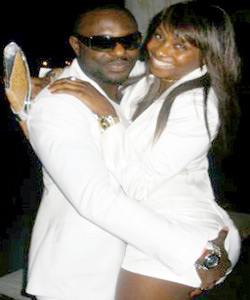 ‘Nollywood bad boy’ and top actor, Jim Iyke has repeatedly said he is a victim of bad press and he has said time and time again that there are haters everywhere trying to pull down his good image.
Recently, the said haters, smelled blood and went for the kill when a picture of his supposed fiancée, Jamaican model, Ketura Hamilton, was posted on Facebook with a baby purported to have been delivered by the model, setting adrift a rumour that the model has dumped Jim and had a baby for another man. But Weekend Groove on a fact finding mission can authoritatively tell our readers that the relationship between Jim Iyke and his Jamaican model is as healthy as it can get. The reaction that came from the camp of the model after a probing question reads “Jim Iyke’s girlfriend, Ketura has not had a baby”

“On the contrary, the model has only recently completed a fashion shoot for P. Diddy. However, the baby she referred to on her facebook is actually her god daughter recently delivered by former Nollywood producer Chinny who is now based in the US and is a close friend of Ketura and Jim” added the spokesperson for Ketura.

Ketura and Jim Iyke have been going on with their relationship for years now and friends of the two love-birds are feverishly awaiting the announcement of a wedding date.“Yes, it is true. I have found the woman of my dreams and we are in love in all totality. She is the embodiment of all that I have been looking for; a tall, pretty, exotic and supremely intelligent woman.” Jim once said of Keura in an interview with a Kenya tabloid.

The pair met while Jim was filming in the US. The two made headlines some two years ago when Keturah threw for Jim a surprise birthday party at the rooftop lounge at Hotel Indigo in Manhattan.