Childhood home of Muhammad Ali up for sale 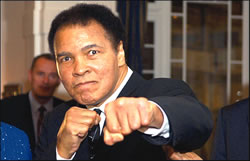 A big piece of Louisville history is up for sale: the house where boxing great Muhammad Ali spent his boyhood.

Owner Steve Stephenson said Monday he’s asking $50,000 for the small white house with a sagging front porch overhang. The house is situated along a tree-lined western Louisville neighbourhood made up of mostly neat, modest homes.

A sign in front of the house says it is for sale by owner. Stephenson declined to provide further details.

The house is assessed at $23,260, according to the Jefferson County Property Value Administrator’s website.

In front of the one-story home is a state historical marker recognizing the residence as Ali’s boyhood home, when he was known as Cassius Clay. The marker says Ali lived in the mostly black neighbourhood with his parents and brother and attended local public schools.

It was at the home where the future boxing champion’s ‘’values were instilled,’’ the marker says.

Louisville Mayor Greg Fischer said the city has an interest in preserving the home of a world-famous native son.

‘’Anything we can do to preserve and expand his legacy, we want to do that,’’ Fischer said Monday before an appearance elsewhere in the city. ‘’His home serves as an inspiration for people to look at that and say, ‘’If this young guy, why not me?’’

The three-time world heavyweight champion remains one of the most recognizable figures on the planet, even though his public appearances have become sporadic as he fights Parkinson’s disease.

Ali’s influence extended far beyond the boxing ring. He retired from the ring in 1981 and devoted himself to social causes. He travelled the world on humanitarian missions and received the Presidential Medal of Freedom from President George W. Bush in 2005.

Through it all, Ali kept his ties to his hometown. The Muhammad Ali Centre, a museum and education centre in downtown Louisville, is one of the city’s prime tourist attractions. Ali came home for a 70th birthday bash early this year.

Donald Lassere, president and CEO of the Ali Centre, said officials there have ‘’every hope that Muhammad’s former home is preserved in a way that makes both Muhammad Ali and the city proud.’’

A few houses down from the home, neighbour James Calloway reminisced how his mother saw the boxing great’s generosity early on, when a young Ali carried her laundry basket to a neighbourhood Laundromat.

‘’He was real neighbourly,’’ the 63-year-old Calloway said.

It was at his childhood home where Ali began dreaming of boxing greatness.

Ali took up boxing at age 12, when his bike was stolen and he wanted to find and whip the culprit. The boy was introduced to Joe Martin, a police officer who coached boxing at a local gym. Ali flourished in the ring, becoming a top amateur and Olympic gold medallist.

Calloway recalled how Ali would run with boots or leg weights to build up his strength and endurance. And how Ali, after making it big in the ring, would come back to the neighborhood in his big tour bus.

Another neighbour who didn’t want to be identified said vehicles occasionally stop in front of the old Clay family home to read the historical marker. The home is several blocks from a main downtown thoroughfare.

Now, the home is showing outward signs of disrepair.

‘’I think it’s a disgrace,’’ said Calloway, who thinks it should be turned into a museum.

Fischer said it’s nothing that can’t be repaired.