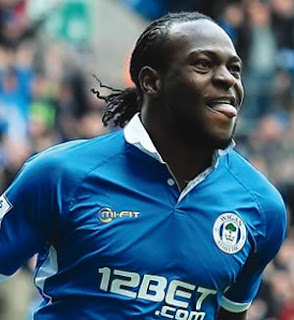 Victor Moses has offered kind words regarding the Latics and the contribution to his progress that the club offered following his £9m switch to Chelsea.

The former Crystal Palace forward has spent the best part of two and a half years with the Latics and played an instrumental part in the survival of the club in the top flight last season.

Speaking after the ink was dry on his new Chelsea contract, the Nigerian international had only kind words to offer for everyone involved with Wigan Athletic.

Moses said, “I’d like to put on record my sincere thanks to everyone at Wigan Athletic for the tremendous support they showed me during my time there.

“I’d like to thank the chairman, Dave Whelan, and all of the staff at Wigan for giving me the chance to play in the Premier League.

“In particular, I’d like to thank the manager, Roberto Martinez, who has been a major influence on my career up to this point, as well as the Wigan fans – who were always great with me.”

Latics fans will certainly hope that Chelsea are able to appreciate the talent that they have signed and give Moses plenty of first team opportunities.
Posted by Unknown at 16:25