Tension in SSS over leakage of staff data 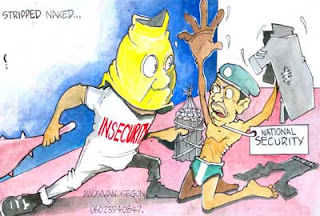 There were indications, yesterday, that the State Security Service, SSS, might have embarked on a secret probe of those behind leakage of the personal data of over 60 current and former staff of the spy organization.

The leakage of the employees’ records, including that of the head of the agency, Mr. Ita Ekpenyong, was reported by a foreign news agency yesterday, which claimed that the development had embarrassed the organisation.

The records of the affected staff and their immediate family members were reportedly posted on a website suspected to have links with the Boko Haram sect, raising fears as to whether the information was given out by insiders or through hackers bent on using it for pecuniary purposes.

The SSS spokesperson, Marilyn Ogar, could not be reached for comments on the development as calls to her phone were not answered.

However, a competent source acknowledged that the agency was aware of the development and had begun investigations into it.

The security source, who described the development as strange and embarrassing to the agency, said that those behind the act would be apprehended and made to account for their misdeeds.

Another source familiar with the agency, said they were suspicious that the staff data were sourced from the data submitted by the affected personnel to a federal government pension agency, which the SSS recently broke away from.

It was learnt that the pension agency might have taken offence and thrown away the data from its archive following an approval by the Presidency that the spy body should set up and run its own pension scheme due to the peculiar nature of its assignment.

“We have a strong suspicion that this information leaked to the website in question was taken directly from the pension agency.

“A cursory examination of the information including the staff records and their family members bear semblance to that which we filled with our former pension managers.

“We are still investigating the source of the information,” the source said.

The Associated Press reported, yesterday, that the personnel records of some past and present SSS staff members including home addresses and names of their immediate family members were leaked onto the Internet in a threatening message that claimed to come from a radical Islamist sect that has killed hundreds of people this year alone.
Posted by Unknown at 14:00