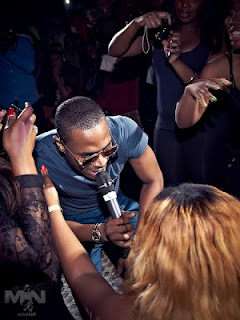 Fans who trooped en masse to watch Africa’s Afrobeats icon D’Banj were certainly not disappointed as his concert was excitedly hailed by a  mammoth  crowd  at  the Hammersmith Apollo Theatre on Monday August 27 2012.

Thrilling  the audience with a rich repertoire of songs spanning his over seven year career, D’Banj, along with his dexterous dancers, and a full live band, issued hit after massive hit on  stage and took the audience musically through huge repertoire, including Mr Endowed, Scapegoat, Why Me and many more songs. He ended the night with his international award winning hit ‘Oliver Twist’. 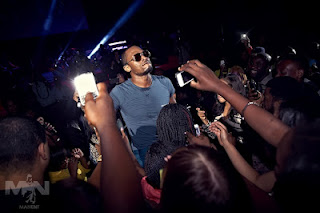 With enviable ease, D’Banj once again wooed his eager audience, showing why, in such a short time, he has become one of Africa’s greatest music ambassadors.

D'banj was supported by his friends from G.O.O.D Music, as well as Naeto C, May7ven and
others.
Speaking after the concert, D’Banj expressed appreciation to all his fans who had enthusiastically welcomed the star just before his epic performance. “It’s been an awesome week here in London. My fans are simply amazing! As always, it has been a great opportunity to once again connect with my fans, one that I will always cherish.”