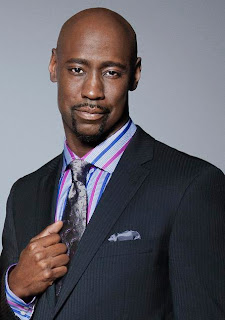 D.B. Woodside recently appeared on V103 where he chatted with Egypt Sherrod. He was asked about Stacey Dash leaving Single Ladies and he says he’s glad she’s gone. Not only is he glad she’s gone, he celebrated when she left the show.
On fan response to Stacey leaving and being replaced by Denise Vasi: You know, I think for some people…for some of the fans…it’s going to take a minute to get used to the fact that we had to make that switch. But we had to make that switch. Last year was very difficult at times to go to set with all that tension that was going on with Stacey. So I wish her well. I’m sure she’s off doing something else.
But we love Denise! She’s fantastic, she’s talented, she’s gorgeous. She’s one of the nicest people that I’ve ever met in my life, And we just love her so. You know, it’s gonna take a minute, but I think that the fans will fall in love with her too.
On if Stacey was THAT hard to work: Yes she was. I don’t want to cause any trouble, but I for one am happy she’s gone. It’s a much better place to be. It’s a much better set…I’m just going to keep it straight. I’m just going to keep it real. I am happy that she’s not there anymore.
On his reaction when he heard the news that Stacey was leaving: When I first heard that Stacey was leaving I went out and celebrated, and had some drinks…All I’ll say is this – is that LisaRaye is my girl. I love LisaRaye. LisaRaye and I have always had a blast on the show; and all I’ll say is I’m Team LisaRaye.
Tell us how you really feel, D.B.

Chris Brown Parties Hard in France with Paris Hilton, a Bunch of Almost Naked Women (And Karrueche Too) 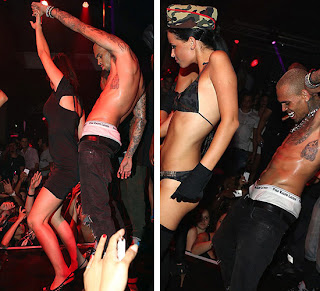 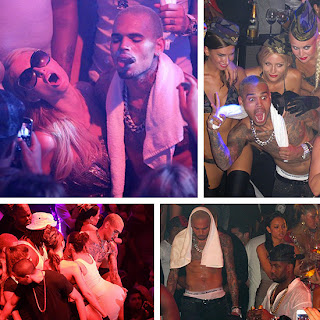 In a vast majority of the photos, a sweaty, shirtless Chris Brown — with either a cigar hanging out of the corner of his mouth, or a bottle of liquor in his hand, or both — can be seen groping and grinding on various under-dressed women, while his nearby girlfriend (described by the Daily Mail as “patient”) watched with a disproving look on her face.

Chris Brown looked like he was having THE time of his life while he partied with a group of scantily clad women, Paris Hilton … and his girlfriend Karrueche Tran, of course, at Gotha nightclub in Cannes, France last week.

Rumors be damned! Karrueche is sticking by her man, thank you very much. 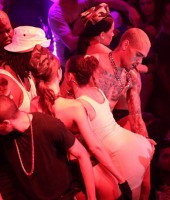 According to the UK-based Daily Mail, “Chris was clearly loving the attention, posing for photographs and sticking his tongue out for the cameras.”

To be fair, Chris IS an entertainer, and he DOES like to dance. So no harm in that right?

And besides, after sweating it out on the dance floor, Chris let his girlfriend fan him down while he caught his breath, and he also switched his champagne bottle for a cool, refreshing bottle of Sprite.

Karrueche also turned her frown upside down, and was pictured laughing it up with her boyfriend and his entourage, which leads us to believe all is well between the two, despite rumors saying otherwise.