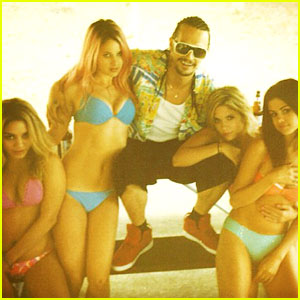 Check out the first clip of James Franco, Vanessa Hudgens, Selena Gomez, and Ashley Benson‘s upcoming movie Spring Breakers!
The flick is about four college girls who land in jail after robbing a restaurant in order to fund their spring break vacation and later find themselves being bailed out by a drug and arms dealer who wants them to do some dirty work.
Ashley recently opened up to us about having to wear a bikini in the film, saying,”I was super nervous before I got the movie and I was worried about it. I talked to Harmony (Korine) about it and he was like, ‘There’s no need to stress out. You guys are college students in the film and nobody has the perfect body!’”