Gwen Stefani to 'Push And Shove' Ellen DeGeneres Next Month! 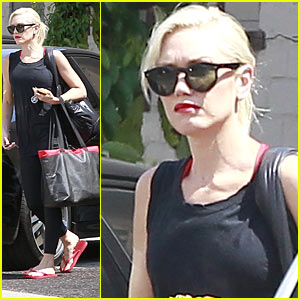 Gwen Stefani steps out in red flip-flops while dropping by a recording studio on Thursday (August 30) in Los Angeles.
Earlier in the week, the 42-year-old No Doubt singer was spotted leaving a Halloween store with her adorable sons Zuma and Kingston, who were dressed as Batman and a cowboy, respectively.
PHOTOS: Check out the latest pics of Gwen Stefani
Gwen‘s band No Doubt recently tweeted, “Just Announced: @NoDoubt will make their return to @TheEllenShow next month during #PushAndShove release week. More details coming soon!”
In case you haven’t listened to it, check out No Doubt‘s newly released single “Push and Shove.”
Posted by Unknown at 10:32