European Player of the Year: Messi, Ronaldo or Iniesta? 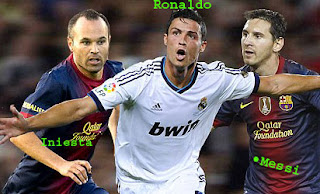 The 32-strong long list has been painstakingly whittled down to just three and today we will discover who was the best player in Europe last season. The three shortlisted – Andrés Iniesta, Lionel Messi and Cristiano Ronaldo – have already beaten off competition from some of the finest footballers on the continent – and the bizarrely included Les Davies, of Welsh side Bangor.

And as part of the glittering Champions League group stage draw in Monaco, we will discover which of the stellar trio will receive the prestigious accolade.

The award – renamed the Best Player in Europe Award last year to replace the Club Footballer of the Year gong previously bestowed on David Beckham, Kaka and Zinedine Zidane among others – is currently in the possession of Messi, who won by a landslide 12 months ago.
All three finalists have a strong claim
Posted by Unknown at 17:09