Next-Gen Audi A8 To Move To Rear-Wheel Drive "MSB" Platform? 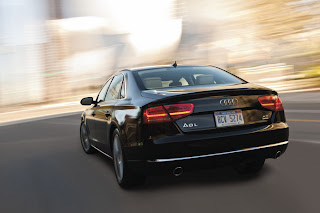 The Audi A8 is relatively unique in the flagship sedan market in that it is based on a front-wheel drive platform, which for U.S. models has been adapted to fit an all-wheel drive system. Audi has consistently touted the packaging benefits that such a design offers, though for the next-generation of the car, which is expected to land in 2016 or 2017, we may see the Volkswagen Group’s rear-wheel drive Modular Standard Platform (MSB) adopted.

MSB, an acronym for its full German title Modularer Standardantrieb-Baukasten, features a conventional front-engine, rear-wheel drive layout, hence the word “standard” in its title. However, it can also be modified for mid- and even rear-engine applications. Some of the first models that will be based on the MSB will be the next-generation Porsche Panamera and Bentley Continental lineup.

The adoption of the MSB platform for the next-generation Audi A8 would not only mean a switch to rear-wheel drive, but also a switch to primarily steel construction. The current A8 is composed almost entirely of aluminum, but MSB is made up of a mix of high-strength steel as well as some aluminum and even some composite materials.

If you’re wondering why Audi would want to make such a dramatic departure from the current A8, part of the reason is the further streamlining of platforms within the Volkswagen Group, which is being overseen by Wolfgang Dürheimer, who was recently put in charge of R&D at Audi.

As Car and Driver points out, the MSB is also much more capable of handling higher engine output than the MLB platform that the current A8 rides on. With a switch to MSB, the A8 could more easily share its drivetrains with the Panamera and Continental, not to mention all the other models destined to ride on the new platform.

With the next-generation A8’s launch still being several years away, Audi is yet to commit on a platform for the car, though a decision will need to be made soon. As for the current A8, look for a facelifted model to be introduced next year. Expect the styling to be changed a little and output on some engines to be turned up a notch.