Here it is! Avril Lavigne shows off her 14-carat engagement ring! 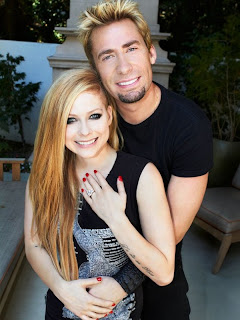 Part of me sincerely hoped this was all a big joke, but by the looks of this picture, the two really are getting married. I’m sorry to all you Nickleback fans (and I know there are millions of you), I just really don’t get this one. I don’t get why any of you listen to their music. Maybe Avril is under the same spell all of you are? I mean that in the nicest way possible.
Avril Lavigne and Chad Kroeger’s engagement may have been a surprise to the world at large, but the Canadian rockers are a perfect match, according to friends and family.
“They have the same values and really understand each other,” a family source tells PEOPLE. “They complement each other and are so happy.”
Kroeger, 37, who first fell for Lavigne, 27, while working on her fifth studio album, proposed with a stunning 14-carat diamond ring on Aug. 8, but according to a source close to Lavigne, the couple isn’t rushing to the altar.
“They haven’t set a date. They’re really enjoying this moment,” a Lavigne pal says.
In an interview with HELLO! Canada, the Nickelback frontman and “Complicated” singer spoke out about their romance.
“I knew I was falling for her,” Kroeger said of working with Lavigne. “It was incredibly powerful and something I’ll never forget.”
Lavigne, who split from Sum 41 frontman, Deryck Whibley, in 2009, admits her new fiancé’s sense of humor was part of the attraction.
“He makes me laugh every day,” said Lavigne. “He takes care of me in every way and is extremely attentive.
What do you think of her ring?