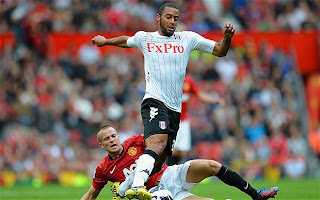 Tottenham have confirmed the signing of Mousa Dembele from Fulham for around £15 million.

Spurs made a bid on Tuesday to trigger a release clause in Dembele’s contract and the midfielder has now agreed personal terms and passed a two-part medical.

Tottenham announced the transfer on their official Twitter account, with Dembele considered by manager Andre Villas-Boas as a replacement for Luka Modric, who signed for Real Madrid in Monday in a £33.2m deal.

Dembele cost Fulham £5m when he signed from AZ Alkmaar in 2010 and caught the eye of leading clubs across Europe after converting to a central midfield role during last season.

Goal.com reported on Monday that Spurs had taken the lead in the race to sign the 25-year-old amid rival interest from Manchester United, while Arsenal, Chelsea, Liverpool were all known admirers of the Belgian.

Fulham had announced on Tuesday night that Dembele was heading to White Hart Lane after he was left out of the Cottagers’ 1-0 League Cup defeat to Sheffield Wednesday on Tuesday night.

Dembele revealed over the weekend that he wanted to “go to the top”, having caught the eye with a man-of-the-match performance against Manchester United on Saturday.
Posted by Unknown at 15:37