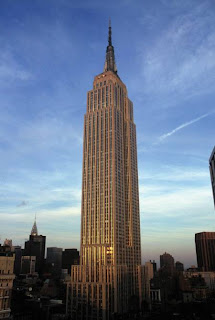 Oh No!! Another absolutely horrific shooting…. this is just awful!!
Ten people have reportedly been shot Friday morning in front of the Empire State Building in New York City.
Authorities rushed the building around 9am after the gunshots were heard. And that's when the suspect was shot and killed by the police, according to the NYPD.
Few details are known right now but one of the witnesses says they saw the gunman run up to a victim and shoot him in the head before an unarmed guard chased him away. Another witness says the gunman was "shooting indiscriminately at people."
Many believe the gunman to have been a disgruntled building employee.
Several ambulances are on the scene now with streets closed around 5th Avenue and 34th Street.
We can't believe this. We just can't. Our thoughts are with everyone involved.
Posted by Unknown at 18:08