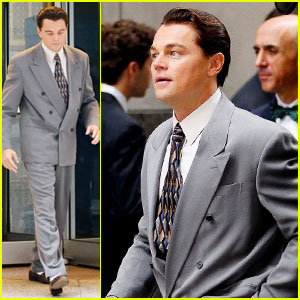 Leonardo DiCaprio gets into character on the set of his upcoming film, The Wolf of Wall Street, on Saturday (August 25) in New York City.
The 37-year-old actor looked handsome in a suit as he exited a building while shooting a scene.
PHOTOS: Check out the latest pics of Leonardo DiCaprio
The Wolf of Wall Street is about a New York stockbroker who refuses to cooperate in a large security fraud case involving corruption on Wall Street and mob infiltration.
The flick is set to hit theaters next year and also stars Jonah Hill and Matthew McConaughey.
Posted by Unknown at 20:40