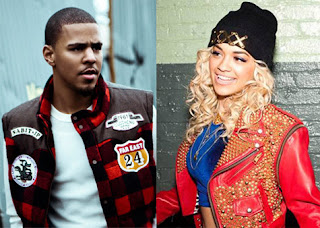 Put your diamonds in the sky. Rita Ora duets with her Roc Nation labelmate J. Cole on “Love & War,” produced by Fraser T. Smith. The Roc stars go back and forth fighting “like the Navy,” but love wins out at the end of the day.

“I don’t want to fight anymore, can we just make love and not war?” sings Rita, while Cole throws up the white flag.