Amber Rose, ‘Our Son Is Going to Know That Daddy Likes to Smoke” 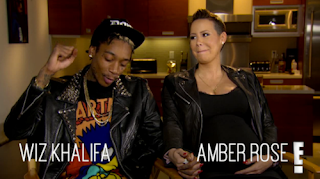 I’m not even sure why even I was surprised at my title. But I was. I had hoped that somewhere throughout her pregnancy, Amber Rose may have changed a bit as her an Wiz Khalifa await their son. It looks like their main priority for raising a child is making sure there is some sort of weed awareness existing in their parent-child relationship. The couple sat down with E! for a pretty interesting conversation about how they plan to raise their child.

I think it’s all about how you’re raised with it. Before there was a much more negative outtake on it. You know, pot and what it can do, and the effects of it. Of course I’m not going to be smoking right there over the baby, because smoke in general and being high is not good for a kid. None of that. But definitely he’s going to know what it is—and he’ll know the difference between being a child and not being able to use it and being an adult and knowing how to use it. — Wiz Khalifa

Just because a few states have legalized weed doesn’t mean the perception has changed or that I should be showing my 3-year-old how to roll it up. Amber then adds:

It’s just like alcohol, basically. That’s how I feel about it, you know. When you’re a kid, you know that you’re not supposed to drink alcohol, that it’s for adults and that’s it. Our son is just going to know that daddy likes to smoke. — Amber Rose

#Shrugs! I’m not even sure how I feel about this. In one hand I kinda understand what Wiz may have been trying to say, but since he was most likely smoking that green prior to the interview it may have been a bit… misinterpreted? I agree that having conversations about drugs and alcohol are necessary when raising children. But as the adult in the conversation, I don’t think your opinion matters much to a child when you yourself are an abuser.
Posted by Unknown at 05:33