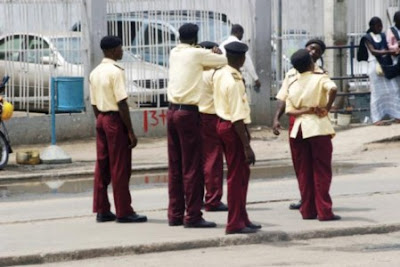 The LASTMA officials tried to seize the deceased car. A commercial bus driver, Isaac Popoola, died on Monday after a fierce struggle with an officer of the Lagos State Traffic Management Authority, LASTMA.

The 54-year-old breathed his last after the traffic officer allegedly hit his head on a metallic part of the bus as they struggled for control of the steering wheel.

Witnesses said that the bus left Egbeda/Akowonjo at around 6 a.m. on its way to Oshodi when a LASTMA patrol van pulled up in front of the vehicle as they approached Oshodi.


“Two officers approached the bus and one told the driver to come down and he refused. So they began to struggle,” a witness said.

The bus conductor ran into the nearby Mosafejo police station, and before he returned, his driver’s lifeless body was resting in the driver’s seat.

And a little crowd, which had gathered during the scuffle, had seized the officer.

At the Area F Police Headquarters, Ikeja, Mr. Popoola’s lifeless body lay in his bus with Lagos registration number XL166SMK. His colleagues and family members gathered around the bus; the wife’s periodic cry shattering the stillness of the afternoon.

“He is very gentle, humble. I don’t know why the LASTMA man killed my husband. Now I’m a widow,” said Dupe, the deceased’s wife, who stated that she was preparing to go to her shop when someone broke the news to her via a phone call.

“From where will I start? My children do not have father again. Who’s going to render the help? Very terrible, I can’t bear it. Who’s going to help me?” Mrs. Popoola said.

While naming Adesanya Olatunde and Ogunride Oludele as some of the culprits, the agency stated that the officers “acted on their own” and flouted operational guidelines.

“Adesanya was later identified by the Provost Marshall of the agency and handed over to the police while Oludele, who was reported to be off duty as at the time of the incident, was still at large,” Babatunde Edu, the General Manager of the agency, said in a statement.

“Effort is on to arrest other suspects connected with the incident,” he added.

Source: premiumtimesng.com
Posted by Unknown at 10:10