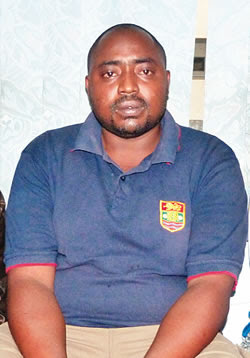 “I spent eight years studying Medicine and Surgery in UNIJOS and graduated in 2004 and later served in Bauchi State. A year later, I got a job at Delta State Oil Producing Areas Development Commission where I practised for six months. But I was later asked to leave.

“I moved to Kogi in 2006 and it was there that a friend introduced me to the business. I was making good money and later got a part time job at Federal Medical Centre. I received N90,000 as monthly salary which was not enough for me. So, I stuck to the pipeline business.”


Salifu Odiba, who was arrested in Kogi State by the Police Special Task Force on Anti-Pipeline Vandalism, Force Headquarters, said he was attracted to the illegal business because of hardship.

The medical doctor, who studied Medicine and Surgery at University of Jos, said his dream was to one day own his hospital. But two years after his graduation, the 35-year-old abandoned medicine and chose life on the fast lane by joining a pipeline vandalism cartel.

Describing his modus operandi, the Kogi State indigene said he acted as a middleman for the vandals and buyers. He said although he never destroyed a pipeline, he was actively involved in the business and soon became popular.

He said he was usually paid commission by pipeline vandals and buyers after he had sold the products.

Odiba lamented that the medical profession was no longer as prestigious as it was due to the “large number” of people practising it. “People don’t visit hospitals like before. These days, many Nigerians prefer to take self medication,” he said.

Narrating how he was arrested, the suspect said he was contacted by a source at Lokoja, the state capital, who claimed to have large quantities of oil in a barge. He was on his way to finalise the deal when policemen arrested him.

Odiba, who vowed not to return to crime if released, burst into tears when narrating the hardship he had suffered in the past. He said although N90, 000 was not a poor salary, the pressures of having to take care of his siblings further increased his financial problems.

He said, “I have four siblings and my parents are retired. I am the first son and through this business, I have been able to sponsor two of my siblings through university and they have graduated. I don’t spend the money I make on myself. I have a fiancée but I can’t even afford a wedding now.

“I don’t want my siblings to suffer and I did this for them. Crime for me was due to a quest for survival but I promise never to go back to it. I spent last year’s Christmas in police custody after being arrested in Kaduna. This year again, I’m spending my Christmas in detention.

“I’m tired of this life of crime and I promise never to go back to it again. My dream is still to own a hospital and even while doing the oil business; I rendered free medical services to people.”

Odiba may be charged to court soon.
Posted by Unknown at 13:23