I Took Off My UNDERWEAR. 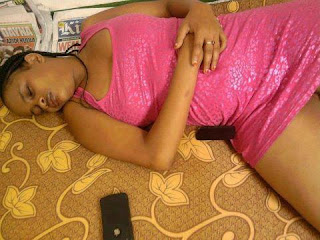 Written by a COLLEGE GIRL before she gave up the ghost......

I Took Off My UNDERWEAR..

I used to be that innocent girl who had the world at her feet. I
was beautiful and I had eyes and HIPS that could make men
sway, and to top it all up, I was a Christian, a very good
Christian with a heart burning for God.
When I entered the university, I met a guy, his name was
DERRICK.
I couldn’t believe my luck the first time I bumped into
him on my way to class, he had such a kind smile and a tender
look that weakened my knees when he spoke.
Because I was late for class we couldn’t talk much but barely
three weeks later, I met him at the fresher’s night party and I
was overwhelmed. We got talking and I found out that he was
in his second year and from that night, we became an
inseparable pair.
At first, we were friends and as months passed by, we got
closer and closer and the chemistry between us was
undeniable.
About a year after I entered the university, Derrick and I started
dating. He was everything a girl could ever want and desire
save the fact that he wasn’t so much ofa Christian. Derrick had
magical hands that made him hard to resist and most times I
fell for it. At first, I felt bad but when I couldn’t help falling into
the same pit I killed the guilt on my inside. And then one day,
one of my friends said I was getting fatter and that got me
thinking and in the process I began to link the dots…first I had a
vomiting spree every morning which I thought was due to a flu
and then I had this morning sickness which I felt was due to
stress and then my missing period…oh no it can’t be possible I
said to myself, I couldn’tbe pregnant!!!
After a series of test outside school, I realized the deadliest
truth, I was indeed pregnant. I was only nineteen, I still had a
whole life ahead of me, what was I going to do. I couldn’t tell
my parents, they wouldn’t hear of it. Ihad to go to Derrick to
tell him what I had found out.
On telling him, I saw him fly into a temper I had never seen in
my life. He was so hysterical, calling me all sorts of names and
I didn’t even know when I started crying heart drenching tears
of hurt and betrayal. When he looked into my eyes he must
have realized how scared and hurt I was and so he pulled me
close and ran his hands through my hair until I had calmed
down and then he said tome in the most subtle voice ever”why
don’t you have an abortion”.I pulled back instantly, I couldn’t
have an abortion! But when he talked about my parents and
the sanctioning of the school and the fellowship which I
belonged to, I knew I had no other choice.
Derrick had made all the arrangements and so on the supposed
day we went to the room- like clinic. I shivered all through my
way
there but Derrick kept telling me that it would be okay and that
he was proud that I made such a brave decision. When I
entered into the room where the abortionwas supposed to take
place I laid down on the table trying to dissociate my mind from
what I was about to do and then a young man told me sternly, ”
you know I can’t perform this procedure with your underwear
on” and then I began to pull it off.As I did this a sense of guilt
overwhelmed me, first I had pulled off my UNDERWEAR of
pleasure and now I was pulling it off to get rid of the stigma the
pleasure had brought…what a shame, I felt so exposed.
All through the times that I felt instruments coming in and out
of me, I kept thinking of the lady I had become and the
hypocrite I had transformed into. I let out a sigh, only if I can
get through this I muttered… only if…and then I felta sharp pain
pierce through the whole of my body, I screamed butthen the
doctor told me to be quiet. I felt another pain but this time I bit
my lip and then the pain began to come in successions. I
instinctively knew that something was wrong but I was too
weak totalk or to move and then I heardthe voices of Derrick
and the doctor talking about the fact that Iwas bleeding
excessively. The pain was so unbearable and I could feel myself
getting weaker and weaker. With the last strengthin me, I
pleaded with God”Oh Lord I’m so sorry for taking my under
wears off, please forgive me.” and I drifted into a world where
the pain seemed less hurtful and the voices seemed more
distant.
Friends, our bodies are the templeof the Lord… Do not take off
your UNDERWEAR when the time is not right. Lots of girls who
gained admission into the university as virgins eventually lostit
so cheaply to guys who have nothing to do with their
destinies. In a bid to get a certificate, they sold out a destiny
that certificate cannot guarantee....she died long time ago..