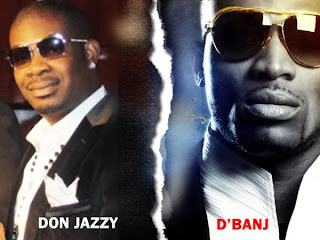 It is obvious that the feud between these two best of friends is yet to be settled. Don Jazzy announced last week that he was opening a nite club almost immediately; the Koko Master announced that he was going to open a nite club as well.
Many artists who were on stage at the Rhythm Unplugged show kept hailing Don Jazzy who sat the V.I.P but when D'Banj mounted the stage during Kswitch's performance neither him nor his brother took notice of Don Jazzy's presence but just kept performingThis raise some eyebrows on whether these two former Mohits Records owners are still in good talking terms.
Posted by Unknown at 13:27