Obasanjo Left his Home 20minutes Before the Fire 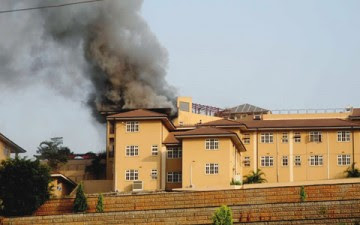 Barely 24 hours after former President Olusegun Obasanjo celebrated the annual Ibogun Olaogun Day in his birthplace, Ibogun Olaogun, Ogun State, a section of his Hilltop mansion in Abeokuta was on Thursday gutted by fire.His wife, Bola, children and grandchildren, said to be on holiday, were reportedly moved to safer sections of the mansion to avoid any human casualty as the fire raged.

The fire started barely 20 minutes after Obasanjo left the house for an undisclosed place. On getting the information, the ex-president hurriedly returned to his burning building to supervise those fighting to quench the fire.

Computers and office appliances were among items said to have been destroyed in the inferno. Although no-one could ascertain the cause of the fire, Olufamous.com gathered that it could have been caused by an electrical fault.

That fire fighters have since brought their situation under control.
Posted by Unknown at 22:26