Amina Is Been Threatened For Posting Topless Photos On Facebook 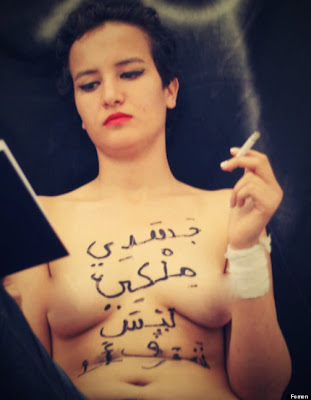 Campaigners including Richard Dawkins have called for a day of action to support a young Tunisian woman who appeared to post pictures of herself topless as part of a feminist movement in the country, and was subsequently threatened with death by stoning.

The 19-year-old activist, identified only as Amina, posted on the Femen-Tunisian Facebook page a topless picture of herself with the words “F**k your morals” written across her chest.

Another controversial image followed, of the woman smoking a cigarette, baring her breasts, with the Arabic written across her chest: “My body belongs to me, and is not the source of anyone’s honour”.


Tunisian newspaper Kapitalis quoted the Wahabi Salafi preacher Almi Adel, who heads the Commission for the Promotion of Virtue and Prevention of Vice, saying: “The young lady should be punished according to sharia, with 80 to 100 lashes, but [because of] the severity of the act she has committed, she deserves be stoned to death.

“Her act could bring about an epidemic. It could be contagious and give ideas to other women. It is therefore necessary to isolate [the incident]. I wish her to be healed.”