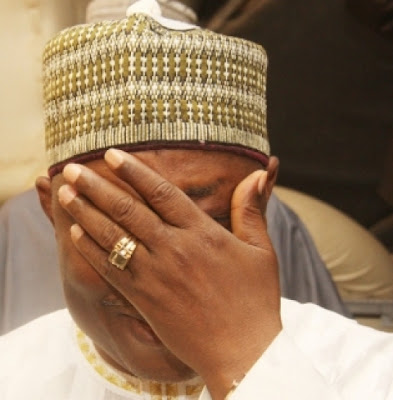 This mockery of Nigeria's justice system is far from being over:


The Economic and Financial Crimes Commission has re- arrested Mr. John Yusuf, a director of the Police Pension Office, who walked away from justice majestically on Monday.

Olufamous.com gathered from a credible source that Mr Yusuf actually under-declare his 'stolen' assets to the court which led to the lenient sentence he got and the ridiculous N750,000 option of fine.

Spokesperson for the EFCC, Mr. Wilson Uwujaren, also confirmed that Mr Yusuf was re-arrested today because there were other pending cases against him.
It would be Mr Yusuf was set free by a Federal Capital Territory High Court in Abuja on Monday after paying N750,000 fine for conniving with others to defraud Pensioners of about N27.2bn.

The convicted thief, Mr Yusuf, would be charged to court again to face fresh charges
Posted by Unknown at 14:30