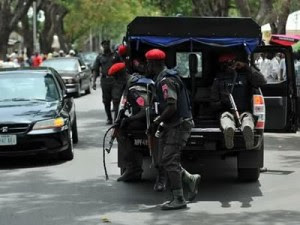 Men of the Nigeria Police in Cross River State on Saturday killed a popular preacher, Pastor John, in Akamkpa Local Government of the state, during a shootout with members of his gang of robbers.

Pastor John and his gang had raided some buildings in the residential quarters of lecturers of the Cross River College of Education on Saturday, dispossessing their victims of money and valuables. Three other suspected gang members were also arrested after a fierce gun duel that lasted into the night...

After the robbery operation, according to Punch, the gang converged on a drinking spot, not more than three kilometres from the scene of the robbery, to share their loot.

In the process of sharing their loot, according to a commercial motorcyclist who witnessed the scene, someone informed the police who immediately swooped on them and a gun battle ensued.

“When the police came there was an exchange of gun fire and one of them was killed, one escaped while three were arrested,” the motorcyclist, identified as Dennis Egom, said.

The pastor, Egom said, was well known in the area and was thought to be a real man of God until the incident.

“He got born again some years ago and was carrying Bible to preach to people and soon became a pastor in the church (name withheld) in 2011. But unknown to some of us who knew him as well as his followers and other residents, John was an armed robber whose real identity was revealed the day he was killed,” he said.