Ladies, There Is No Alternative To Breast Feeding 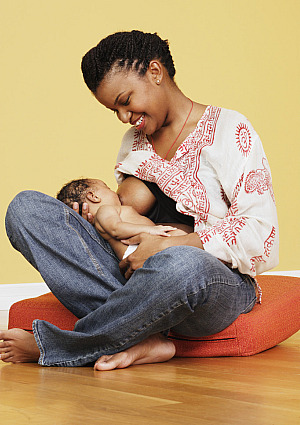 Working mothers face the challenge of breast- feeding their children up to the required six months and many factors contribute to this. Blessing Ukemena finds out from doctors why this breast milk is so important even as mothers lament what they pass through.

Only about 13 per cent of Nigerian children are exclusively breastfed for up to six months. This is according to a UNICEF research conducted in Nigeria in August 2012. A development which points to the fact that most Nigerian children are deprived of this essential form of nutrition.
Speaking to Dr. Folayun, a pediatrician at the Zankli Medical center, she said that working mothers rarely breastfeed their children to the required six months sometimes due to no fault of theirs. “The number one factor against this six months exclusive breastfeeding or ‘baby friendly’ is that most work places only give a period of three months maternity leave which is not enough.

If the baby needs to feed for six months and the mother’s leave is just three months after delivering, then there is a problem.

When she returns to work, she is under more stress and this will cause her not to lactate properly, that is, the milk flow will reduce. Another factor is that most work places are not baby friendly. Some mothers have been sacked because they brought their babies to work. Breastfeeding itself is not allowed in some work places and so mothers have to keep the baby with a nanny or in a day care center.” She said. Dr. Rita Idemudia , the Senior Consulting Pediatrician at the General Hospital, Wuse Zone 3 was of a different opinion.

In an interview with Leadership Sunday, she said that the lack of will and ignorance on the part of the mother are two factors that do not allow working mothers to breast feed their babies up to the required six months. “We have found that most mothers are not willing to do exclusive breast-feeding for six months because they just believe it cannot be done. Some say that the milk is not enough so they have to use substitutes.

As a mother, one has to make up her mind right from pregnancy period that she will breast feed till six months so that she will be prepared for any eventuality. Another thing is that most mothers are ignorant on how to properly place a child during breastfeeding. The baby has to be placed tummy to tummy with the mother.

She should be sitting comfortably with her hand supporting the baby’s bottom. As a working mother, you should also prepare your child for when you will resume work. First, you have to learn how much your baby needs per meal, be it 30 ml or 90ml then you can express the required breast milk into a sterilized feeder so that your baby will not be hungry when you leave him with a nanny”

Mrs Jane Nwafor is a mother of two boys and currently a house wife in the FCT. She told leadership sunday that she is exclusively breastfeeding her younger son who is about 5months old. “I could not do baby friendly with my older son because I was working then but now I am at home, I want to give my younger son only breast milk till he is six months old. It is not very easy because you have to eat very well yourself or you will be feeling dizzy all the time.” She stated.

To this, Dr. Idemudia said that there are rare cases of children who wean themselves of breast milk but that the alternative is not to use substitutes but to express the milk in a feeder for the baby to take and if such continues, then the mother can go to health professionals for assistance.

Mrs Okenesi, a working mother who was at the Wuse General Hospital to get her baby immunised, said she now takes palm wine to help the flow of her breast milk. “I usually breast feed my babies exclusively till about 5months but it is not easy. Some weeks back I noticed that my breast milk was not flowing much and I was told to take more liquids. I took more tea than usual but it did not help so I decided to take palm wine and the breast milk is flowing well now. My baby who is now three months will take the milk to his satisfaction” she said.

Dr Idemudia also stated that there is no such thing as not enough breast milk for any child as God has made it in such a way that no matter the size of your breast there is enough for the baby.

She explained that breast milk is in two parts, the fore milk which contains more of water and the hind milk which has more fats and is the main meal for the child, “Most mothers say that the milk is not enough for the child but that is a wrong notion. If a mother keeps shifting the child from breast to breast the baby just gets the watery part of the milk from both breast as such the baby is often hungry, sleeps less and is more prone to disease. But a well fed child has high immunity against infections, he has all the nutrients to grow well and perform better in school than other kids that are not well breast fed.” She said.
Posted by Unknown at 07:11