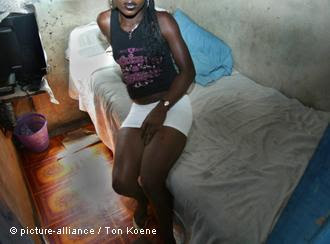 A 31-year old woman has been arraigned before Apapa Magistrate's court, Lagos State, southwest Nigeria, for allegedly burning her friend's breast over suspicion that her friend was secretly sleeping with her lover.
The incident happened at Railwayline, Ijora Badia where both friends live.

Miss Ifeoma Nwosa allegedly assaulted Blessing Amade by hitting her with fist blows severally and using a burning firewood to assault her right breast during the fight.

Blessing's breast was badly burnt and she was rushed to Apapa General Hospital, Lagos where she is being treated.

P.M.NEWS gathered that Ifeoma, who suspected Blessing of dating her lover, had confronted her on several occasions. But Blessing denied the affair.

On the day the incident happened, Ifeoma who had gone out was tipped off by her neighbours that Blessing had slept again with her boyfriend.

When Ifeoma confronted Blessing, an aurgument ensued between them during which Blessing warned her to stop accusing her about such a thing and that if she wanted to keep her boyfriend, she should control him and not her.

This angered Ifeoma who allegedly attacked and rained several blows on Blessing and also took a burning firewood and burnt her breast.

The matter was reported at Ijora Police Division and Ifeoma was arrested and charged to court under the Criminal Code.

She is now facing a three-count charge of assault occassioning harm and inflicting grievous injury on Blessing.

When the charge was read to her, she pleaded not guilty.

Ifeoma has been ordered remanded in prison custody pending when she will fulfill her bail condition.
Posted by Unknown at 22:53