Men!!! ....What Your Woman Secretly Wants In Bed 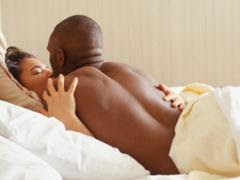 Sexual satisfaction is constantly addressed by magazines and sex columns in an attempt to answer the elusive question, "What do women want in bed?" So what doesyour woman really want in bed? Besides deep intimacy,romance, and maybe an exciting new position to try, what she truly desires is a connection with you — her man.


When a woman is quiet or seems dissatisfied, a man often looks to himself, wondering if he's lacking technique or not doing enough to please his partner. A man may expect to hear those moans of passion and see his woman lose herself. If this level of intensity is missing, he may wonder, what's wrong?
The truth about what women want in bed lies less in technique and more in attitude. She craves your confidence. A woman doesn't expect a man to be a mind reader, but rather to be curious bout every detail of her body and eager to explore it. She wants a take-charge kind of guy who's neither shy nor timid about his need to completely ravage every bit of her.
As sex educators, we teach women the very same thing. We encourage women to take charge of their sex lives by communicating their wants and needs to their partners. Through communication, we remind them, they're much more likely to get their needs met. If a woman is more confident, the theory holds, he's likely to feed off of her confidence.
Part 2: Don't Rush Things — Enjoy The Ride
In reality, many men are often focused on the end goal:orgasm. Rushing to get to the climax like they're in a race, they often forget to be present and in the moment. Most women will grow bored of this. I'm not saying women don't like a quickie every now and then, but this approach will eventually kill the enjoyment of sex. And often, this betrays a lack of confidence in the man. A woman's intuition kicks in.
A woman wants to feel that she's in the hands of a stable, secure, present and focused man — not a guy who's racing to the finish line. This kind of juveline behavior leaves her feeling like less than a woman. There's also a lot of truth to all the hype about foreplay. Foreplay has less to do with specific sex acts, like kissing or oral sex, and much more to do with romance. The key to good foreplay is to relish every second of the experience, to be a little selfish (yes, selfish) but also present in the moment — and not rushing through it.
True foreplay includes inhaling her scent and touching every part of her body with your hands and mouth. True foreplay includes kissing lips, necks, ears and more. It involves undressing her, slowly enough, but not too slow, with just the right amount of force. Foreplay includes touching parts of her body you don't normally touch, inner thighs, lower stomach — and excluding the vagina until the very last moment. Touching close — but not right away — adds an element of tease to the act too. Massaging the feet while kissing her, touching her legs and thighs with passionate squeezes — all the while being focused and present.
In the end, confidence is key, not just in the way a man carries himself, but also in the way he makes her feel — like she's in the hands of someone who knows what he wants, knows what he's doing and gives her the security she needs to completely surrender. Bringing this to the bedroom can unleash her inner vixen. If she feels safe and secure, she is more likely to let her wild side come out too.
Posted by Unknown at 00:48