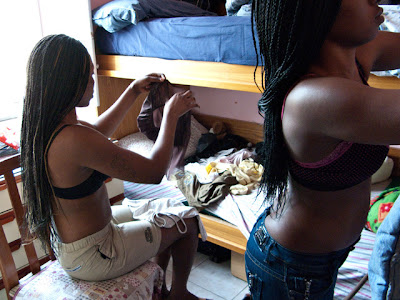 Just last week, Naples mafiosi were convicted of forcing a cancer patient, Lilian Solomon from Nigerian,   into prostitution. The situation of young Nigerian girls who are sold into sex slavery, many against their wish, is worse than you could ever imagined. Some of the girls as young as 13.

Read the report from Daily Beast about dirty trade below...


Across Italy, Nigerian women are forced into the sex trade, essentially kept as slaves who are bought and sold and moved according to a moribund supply and demand. Some of the prostitutes are young girls, just 13 or 14 years old. Others are in their 20s or 30s. Many have children. Some are still married to men in Nigeria. They usually sit on white plastic chairs under umbrellas to protect them from the rain in the winter and the harsh sun in the summer.
The highest concentration of Nigerian forced sex workers is in and around Naples, but they are not limited to the southern reaches. On Thursday, in the central region of Abruzzo, four Nigerian gang members and an Italian taxi driver who allegedly procured prostitutes across the country were sentenced to between nine and 15 years in prison for making 23-year-old Nigerian Lilian Solomon prostitute herself even though she was in the late stages of lymphoma cancer.

The court in Teramo ruled that the Nigerian band prohibited the young woman from seeking treatment and should be held responsible for her death. She was represented in court by members of “On the Road” association against sex trafficking, which alerted authorities about her plight. Solomon testified under oath against the band before she died in 2009. The sentence, four years after her death, won’t bring her back, but it is one small step toward holding the sex traffickers accountable.

According to Renato Natale, a local Neapolitan doctor who is a former anti-mafia mayor of Casal di Principe, the majority of the Nigerian girls and women who are sex slaves were sold for around $50,000 by their parents or husbands in Nigeria, often to pay loan sharks or to get families out of debt. Some women paid sums of more than $13,000 out of their own pockets in exchange for the promise to find legitimate work in Italy with the goal of sending money home or even eventually bringing their entire families over. Natale says when they arrive in Italy, they are often raped into submission and plied with drugs and turned into prostitutes.

Many of the women have scars on their bodies from a voodoo-style initiation ritual where they pledge allegiance to their pimps out of fear of torture. “Frida,” 26, is a former prostitute who now works at a shelter for abused women in Rome. She says her initiation included vaginal penetration with a hot candle. She has scars on her inner thighs from the hot wax. She worked on the Via Domitiana for three years before she ran away with one of her clients who she befriended. She said many of the women on the Neapolitan highway try to convince the clients to take them away, but they often get caught and the men are threatened never to return. “Even the police sometimes pay for sex,” she told The Daily Beast. “There is no protection there from anyone. There is no one you can trust.”

She says she was required to pay the Nigerian mafia dons $400 a month for one-square-meter of highway to work off the $50,000 investment. Natale says the Nigerians, in turn, pay a fee to the Casalesi clan of the Camorra organized-crime syndicate, who run the sex trade around Naples. Natale says the women are not allowed to charge more than $13 a trick—the market rate for street sex in the impoverished south—and they are not allowed to refuse customers. Frida says they were afraid to charge more. “They watched us all the time,” she says. “They would drive by or send spies to make sure we stayed in line.”

Prostitution is not illegal in Italy as long as the sex workers are over 18, but it is illegal to pick up a prostitute on the street. Recently, police have been enforcing the client crackdown on roadside prostitution by fining the clients, so the mob has started buying up apartment blocks along the Via Domitiana and in other parts of the country. They have started moving the women off the streets and into the villas where drugs are sold in the basement and sex is sold upstairs. Natale used to visit the women on the streets and give them medications for STDs. He says the move to put the women in the houses is far more dangerous and life-threatening. “These people are treated like merchandise,” he says. “Now they are being kept in these houses that are protected by armed guards. They were somewhat safer on the streets because at least there we could check on them.”

There is little hope to stop the illegal sex-trafficking racket, says Natale, because most of the women are illegal immigrants and do not have documents and are not in the Italian state system and therefore “nonexistent” in the eyes of the authorities. But there is also a bigger problem in that there is no authoritative government entity currently involved in stopping sex trafficking in Italy. All the work is done by non-governmental organizations with limited funds and virtually no power. “We are like ghosts,” says Frida, who recently legalized her living status in Italy and wants to help other Nigerians get off the street. “We are literally shadows on the highway.”
Posted by Unknown at 05:16