Types Of Guys Who Are NOT Husband Material 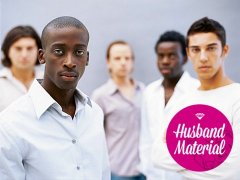 Does the guy you're dating have long-term potential?
In general, women tend to rely on words, whereas men rely on actions. So, when men speak sweetly to women, women believe them, even if they don't behave accordingly. Men, on the other hand, see how women behave, and interpret the behavior to mean what they want to believe, regardless of what the woman says. So, if you say you don't love him, but continue to have sexwith him, all your words are in vain; he interprets your actions and draws his own conclusions.
This discrepancy between words and behavior is especially problematic in marriage-boundrelationships. So, watch out if your man is one of these five types:

1. The "help me until I'm ready" guy. The "need help" type is totally entrenched in his own insecurities. He only talks about his own problems —never yours — but he wants a lady by his side because it makes him feel worthy. So, he keeps her there by asking her to help him "until he's ready." But, guess what: He'll never be ready, and so, he is not husband material.
2. The "dare to discuss marriage" guy. Since he knows women believe in words not actions, he dares talk about marriage and future plans with you, knowing it's what you want to hear. But that's all he'll do; no further action is ever taken. There is never a timeframe for actions; actions are even never discussed, and if they come up, the conversation suddenly goes in different directions.
3. The "be my guest and discuss marriage" guy. This guy lets you do all the talking about marriage you like. He knows you dream about it; he listen to you discuss it in great detail — where your home will be, what kind of furniture you'll buy, what kind of wedding you want. And when you ask him about dreams, he says, "Whatever you want, honey." Always look at his actions. If there aren't any, if he's all talk, he's not husband material.
4. The "bear with me" guy. He finds nice, logical excuses that seem acceptable. You know, he can't take action now because he's busy with his career, or his weight loss, ior his parents' needs. You name it, and the statement is "Bear with me."

Well for those of waiting for maurice i never ready oooooo!
Posted by Unknown at 04:26