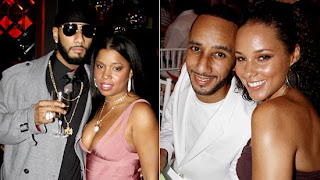 Mashonda, the ex-wife of music producer Swizz Beatz, has responded to statements made by Alicia Keys who insists Swizz was a single man before she offered up her body to him.

Normally I don’t waste my time with drama between messy divas, but I take care to remember that my readers might be interested in this ongoing drama.

Mashonda recently sat down with Global Grind to give her response to Keys’ statement:

What was your initial reaction when you caught wind of Alicia’s JET Magazine interview?
“Not much surprises me anymore when it comes to this situation. I truly thought that everyone’s priority was the well being of the children involved. I don’t see the sense in throwing oil on a fire, it just takes us back to point A. The Jet interview just added insult to injury. I can’t figure out how this makes us better. How is it a positive, humanitarian gesture? But artists must protect their reputation and I get that.”
In the interview Alicia Keys says “…[They] were apart for some time before we ever got together…that doesn’t matter to those who take pleasure in trying to knock others down…there’s no need to fight what’s not true…”

Did you feel like this was a indirect stab at your open letter?
“There have been many stabs and shots taken, thankfully they don’t bother me the way they used to. I’ve never lied about one thing involving the demise of my marriage. No, we were not “apart” or separated, and that’s just a fact that can be proven in many ways. Blessings have a way of disguising themselves. This situation has helped me to understand life and what really matters.”
Posted by Unknown at 00:45