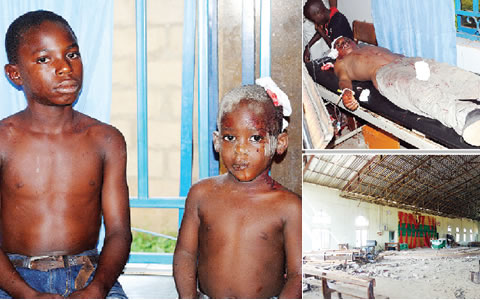 The suicide bomber who killed eight Catholic worshipers in Kaduna on Sunday drove into the church as the worshipers knelt praying and the priest was serving the Holy Communion, eyewitnesses and survivors said.

The bombing, which happened at the St. Ritas Catholic Church, Ungwan Yero, Malali, Kaduna State, also left 100 injured. However, seven persons were reportedly killed in the reprisals that followed the blast.

A victim, Jacinta Oko, said, “We just heard the loud sound of the bomb blast when we were preparing to take Holy Communion. Before I knew what was happening, I found myself on the ground. I can say that so many people died because it affected the side where the choir members were sitting.”

A 30-year-old mother of four, Mrs Veronica Johnson, who also survived the bombing, confirmed that they were in the middle of the service when the suicide bomber hit the church. Mrs Johnson, spoke at the bedside of her two children who were victims at the St. Gerard Catholic Hospital.

Meanwhile, President Goodluck Jonathan has condemned the Sunday incident, saying it has shown that those behind the attacks in parts of the country do not mean well for Nigeria. Jonathan made the submission in a statement by his Special Adviser on Media and Publicity, Dr. Reuben Abati.

The statement noted that the President was extremely saddened by the explosion. He described it as “barbaric, cruel and uncalled for.”

You may wish to know that Boko Haram’s insurgency in Nigeria has led to more than 2,800 deaths till date.
Posted by Unknown at 15:51