I’m pregnant... and so’s my boyfriend

Mike, 25, has the rare phantom pregnancy Couvade syndrome. Amanda, of Manchester, said: “People pay more attention to his bump than mine.”
Mike initially got the brush off from disbelieving Amanda — until he started suffering morning sickness just like her.
At first irritated Amanda suspected tattooist Mike was taking the mickey out of her pregnancy symptoms when he complained of feeling queasy.
But when he started running to the toilet after waking up each morning, she realised it was definitely no joke.
Mike said: “When I started being physically sick on a daily basis, she began to take me more seriously.”
When Mike’s symptoms — which now include a swollen belly, hot flushes, exhaustion, water retention and food cravings — became increasingly severe, he consulted his GP.
The doctor diagnosed an extreme case of Couvade syndrome, whose sufferers experience an intense form of male phantom pregnancy. 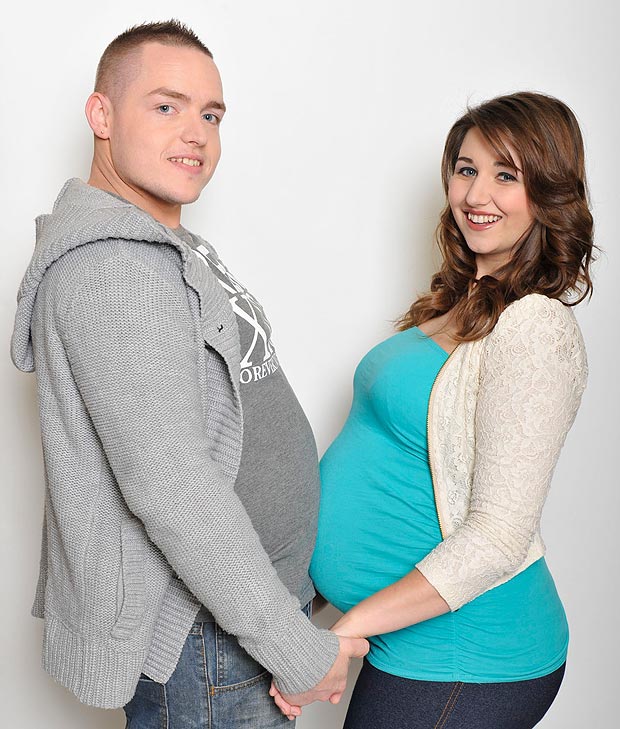 Oh baby ... Amanda and Mike with bumps
Mike said: “The exhaustion is the worst — but the headaches, heartburn and big belly are not enjoyable either.
“Amanda’s belly started to grow when she reached three months — and she got really excited about looking pregnant.
“Then a few weeks later, when getting changed for bed, I realised I had a similar shape.
“Now at 33 weeks I’m two stone heavier than I used to be and have a round, bloated belly. And anything Amanda’s body does pregnancy-wise, mine does too.”
Amanda, 25, said Mike makes a very wimpy mum-to-be.
She added: “Mike is being a bit of a girl over it all. As a woman I’m coping much better than him. I actually end up looking after him more than he takes care of me sometimes.
“And people pay more attention to his bump than mine. A pregnant man is more interesting.”
Mike, who has been with Amanda for three years, admitted he does have a tendency to moan. He added: “I’ve never felt so rough.
“I’ve always taken pride in my body, going to the gym four days a week, keeping slim at 6ft and 14st.
“So the water retention around my belly is a big shock.
“With the cravings, heartburn, headaches and constant exhaustion, I now really respect what women go through during pregnancy.
“I’ve had to take extra breaks at work, have early nights and buy larger-sized clothes because I’m two stone heavier. It’s crazy.
“Thank heavens Amanda will be the only one giving birth.” 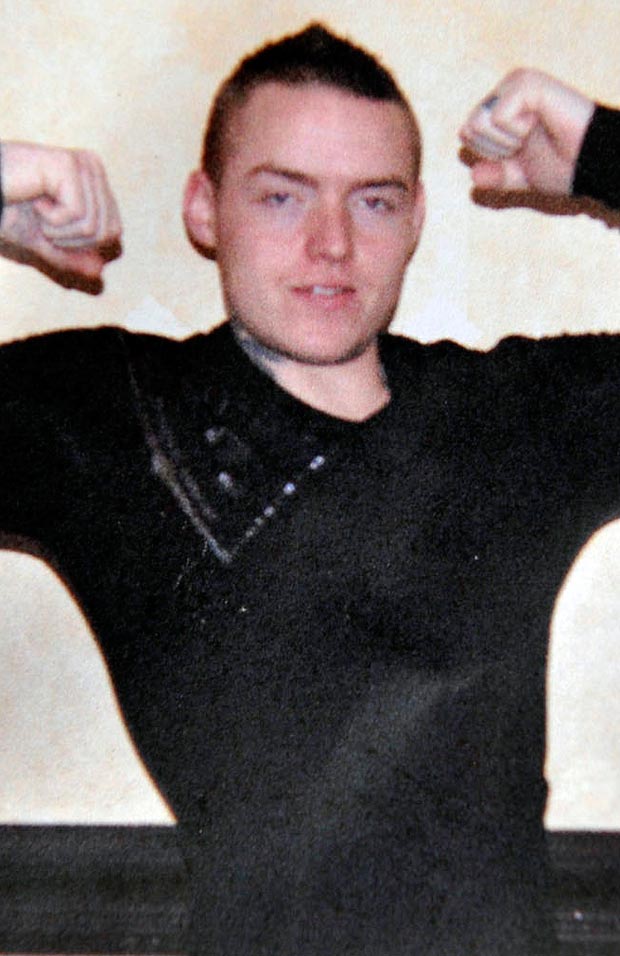 Slim ... Mike Dowdall proudly shows off toned body before being hit by phantom pregnancy
Such extreme forms of Couvade syndrome are rare — and the precise causes unknown.
Some experts claim it is caused by psychological factors while others say it is down to high levels of female hormone in the body of the father-to-be.
Sufferers have complained of weight gain, nausea and vomiting, stomach cramps, loss of appetite, cravings, headaches, toothache, nosebleeds and itchy skin.
In almost all cases the symptoms disappear after the mum gives birth.
The GP told Mike that Couvade syndrome typically affects men who are very close to their partners.
Mike, from Manchester, said: “Hearing this made sense to me. My body wanted to know what Amanda is experiencing.
“And while I do moan, I also find it amazing to be having these symptoms and experiencing them with the woman I love.”
Shop owner Amanda said she sees the phantom pregnancy as a compliment — even though she was not amused at first.
She added: “At eight weeks I’d wake up early and he’d complain he was feeling sick. I thought he was mocking me. Now our friends mock him about his phantom pregnancy. But others say it’s because he loves me so much.” 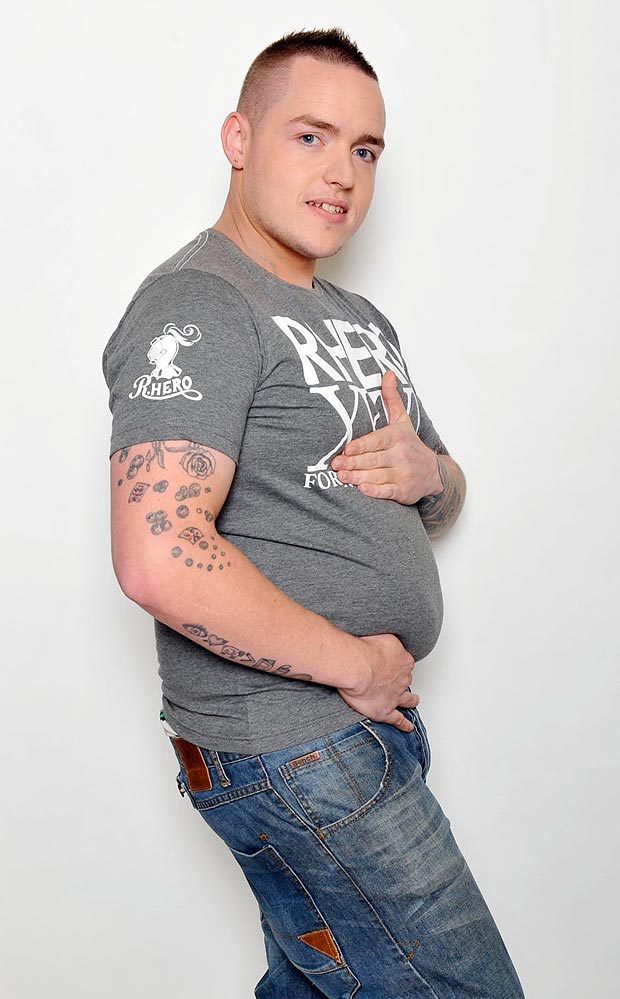 'Pregnant' ... Mike Dowdall gets to grips with swollen belly
Amanda also enjoys having someone to share her food cravings — especially when it is chocolate.
She said: “When I tuck into selection boxes late at night, I don’t feel bad as Mike is sat right next to me tucking in too.
“Mike sometimes says he fancies a certain sandwich or a certain ice-cream and I’ll be craving the exact same thing.
“We have been through phases where we both only want plain foods and then spicy foods.
“It’s really strange but we’re used to it now.”
But Amanda admitted she does sometimes wish she was the only one with pregnancy symptoms. She said: “When I’m rubbing his shoulders or lower back to help relieve his cramps, I feel like I’m looking after him when I’m the one carrying the baby.
“But he does return the favour and there are times when we’re both lying in bed totally shattered moaning about the same symptoms, which is quite comforting.
“We even find ourselves comparing baby bumps in the morning to see whose is bigger. I always win.”
Their baby boy is due on October 23 — and both Amanda and Mike are now busy getting the nursery ready. Mike said: “At the moment I’m just letting these symptoms play out and trying to concentrate on preparing for the arrival of our first child.
“After going through the motions with Amanda I feel like I’ll definitely be able to give any man or woman advice on pregnancy.
“And it will be a good story to tell our son when he’s older.”
Meanwhile Amanda is eager to see just how far Mike’s phantom pregnancy will go.
She said: “Our research suggests there is a chance he will experience contraction pains.
“I’d love to see that because I don’t think there’s a man in the world who truly understands how painful labour is.”
By CAROL COOPER, Sun Doctor
THIS strange syndrome can cause a wide range of pregnancy-like symptoms. Behaviour can change too — a few dads-to-be even take up sewing or knitting.
There’s no exact definition for Couvade syndrome, so nobody's sure how common it is.
But it is very rare to see a man with all the possible symptoms. It can be a very positive thing if it makes the man eat more healthily or give up smoking. But some experts suggest it can be a kind of rivalry, because the woman is getting all the attention.
There are also hints that men whose fathers were emotionally distant are more likely to get it.
Whatever the cause, Couvade syndrome is relieved by the birth. This can occasionally be painful. Especially as Dad will have to go without gas and air.
Posted by Unknown at 16:04