Tony Payne Has Finally Moves On Without 9ice 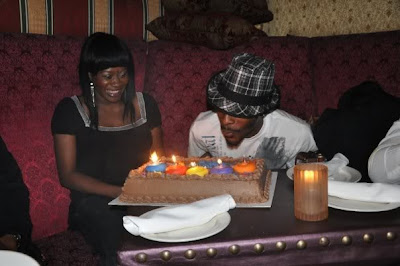 Whoever thinks Tony Payne hasn’t put her crashed marriage with pop singer, 9ice behind her might be disappointed to hear that she has indeed moved on with her life, despite the odds.The babe was recently spotted at the Love Jones edition of Str8 Up Hip Hop, a show organized by Now Musik. Adorned in an extremely mini gown, Payne shows up looking radiant and full of smiles.And guess what? She didn’t attend the event alone....
According to Vanguard, the mother of one who made herself taller on a six inches heels, was led into the hall by a smashing young man who obviously accompanied her to the event.

Tony strolled into the event venue minutes after the show had rolled by, and heads couldn’t help but turned to admire the woman who once held 9ice spell bound.

Obviously not minding what 9ice does with his life as she also has hers to live, she was ushered into the V.I.P corner, a platform just above the cheering crowd.

I hear she plans to get married to another (young) man soon.
Posted by Unknown at 07:54