PDP Heading for Rocks! Amaechi, Uduagban Walk Out of Meeting 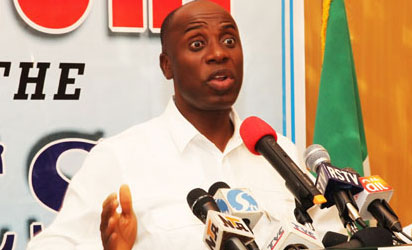 Efforts by the PDP to mend fence failed again on Sunday as the Chairman of the Nigerian Governors’ Forum, Gov. Rotimi Amaechi, Delta State Governor Emmanuel Uduaghan and some top dignitaries walked out of the party’s South-South zonal meeting in Port Harcourt.

It was observed that the Akwa Ibom State Governor and Chairman of the new PDP Governors Forum, Godswill Akpabio, had begun addressing the gathering when Amaechi and Uduaghan walked out.

Akpabio had announced a donation of N1m to each state chairman of the party in the South-South based on Uduaghan’s call that members of the party should be well-fed by the PDP.

But the N1m announcement by Akpabio angered Amaechi, Uduaghan and some top members of the PDP in attendance. The presence of Bamanga Tukur could not stop the men from abandoning the meeting.

Uduaghan had said earlier that even if all the roads were tarred, members of the PDP would appreciate the provision of food on their tables.

He said, “I join all my brothers in the South-South in welcoming you (Tukur). Even as an elected governor, I must tell you this. Even if you tar all the roads in the South-South without putting food on the table, our members will not appreciate the party. If you want to prevent our members from going to other parties, you must put food in the stomach of our supporters.”

In a veiled reference to the 2015 election, Akpabio urged party faithful to support President Goodluck Jonathan. he said members of the party to see the success of Jonathan as that of the South-South.

“There is a hand of God in every position of leadership. Bayelsa is, perhaps the smallest state in Nigeria, but God decided to choose Goodluck Jonathan from Bayelsa State to become the President. We must all support our brother to succeed. For us, we shall not fail and we will never fail,” Akpabio stressed.

Strangely, Akpabio bragged that the PDP would win 30 states in the 2015 elections and the Presidency.
Posted by Unknown at 20:56