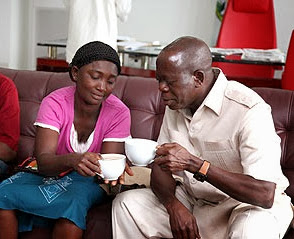 You know some Nigerians are funny right? Lol, well they are. Some of them, especially in Ogun State have commended the Governor for apologising and empowering the insulted widow, but feel more can still be done. According to them, their meeting each other was divine, and they think, both parties should embrace the opportunity. One said Oshiomhole is a widower while Mrs Joy Ifile is also a widow and so both should marry. Read what they said after the cut.

Albert Ashipa, a politician in the state, said, “I am of the opinion and conviction that the meeting and the incident between the governor and the widow, which later attracted public attention, was divine. As we can see today, the governor felt for the woman, had to apologise over the error and even empowered her.”

“From my own opinion, I think God has a purpose for the two of them and there is nothing wrong if the two eventually fall in love, in view of their marital positions. I believe both cannot and should not remain single parents for life,” Adunni Eweje, a petty trader in Kuto market said.

Razaq Ayinla, a civil servant, while commending the governor for his gesture, concurred that the development was God’s doing and advised both the governor and the woman to make good use of the opportunity.

Adesola Adenopo, a resident of Government Reservation Area (GRA) in Abeokuta, in her reaction, noted that biblically, it is appropriate for the two of them to re-marry.


Also commenting, Olanrewaju Dasaolu, a hotelier gave kudos to the governor, for realising his error and correcting himself.