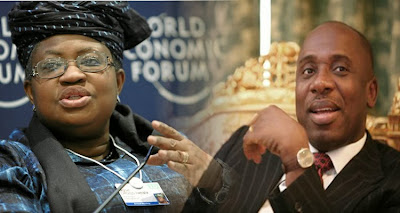 Governor Rotimi Amaechi has raised the alarm that President Goodluck Jonathan's ministers are undermining the welfare of Rivers people because of his disagreement with the Presidency. Ngozi Okonjo-Iweala, he said, has seized the World Bank and ADB loans that was approved by the National Assembly for Rivers State.


“The Minister of Finance, Ngozi Okonjo-Iweala, is using her position to undermine the safety and health of the people of Rivers State. I can’t afford to give all Rivers people bottled water, but all I can assure you is to ensure the provision of potable water.

“But the Minister of Finance has refused to release it and I think I should put that before you (House Committee on Water Resources). They want Rivers people to die.”

Gov. Amaechi has therefore called on members of the House of Reps to probe the Minister's wicked action.
Posted by Unknown at 17:13