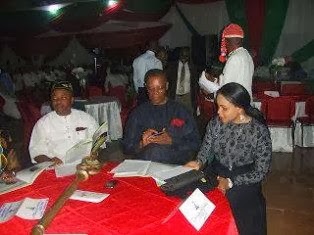 Sometimes, you just sit back and ask yourself, how on God's earth do we get this low? Why do we have these things happening to in our country? I was reading this story on a blog of "Secret Reporters", and it was like reading a fiction novel. If not for the pictures, I would have dismissed it? The report reads:
*-*-*-*-*-*-*-*-*-*-*
"The House of Assembly members in Akwa Ibom State must truly be a body of jokers. The revered mace which symbolizes authority was spotted at a social event lying carelessly on a table which is meant to eat and drink. This is certainly how they do it in Akwa Ibom State, where the tin god governor can ask his aides to beat up any of the Honorable members who disagrees with him, as was done to Onofiok Luke, who is popularly known to be proud. Jokes currently going on is that following the level of impeachment of Speakers going on rampantly in Nigeria, the Akwa Ibom State speaker is scared and has resolved to be carrying the mace around to forestall such happening to him".
*-*-*-*-*-*-*-*-*-*-*
A few years ago, we heard of a speaker in the North who goes about with mace in his car. He denied it, and there were no pictures then. The matter died; even though he was later impeached. Now, imagine if trouble start in that hall. The mace will, as usual, be used as Weapon of Mass Destruction. The sad part is that, the man seated in the center looks like former Governor, former Minister and PDP BOT member Don Etiebet, .