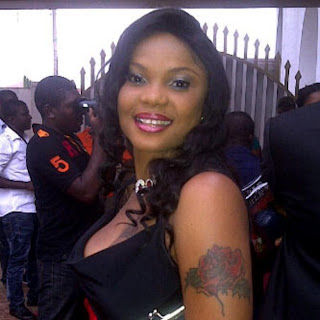 Iyabo Ojo, Nollywood actress, is a household name and a front-liner in the Yoruba movie circle even as she maintains a crossover appeal with the English counterpart.

Noted more for her girl-about-town roles, Ojo is also a film producer of class, having churned out award-wining flicks like Omo Gomina and Arinzo currently making waves, and Tembelu just waiting to be released. She spoke to Gboyega Alaka on a number of industry issues, including her latest works, the susceptibility of Nollywood marriages, piracy and her newly opened beauty clinic.

You are one actress who’s got a peculiar swagger to your personality, especially when acting the girl-about-town roles; where did all that come from?

Well I guess that might suggest that I kind of grew up in the streets. But not at all; I’m actually a very homely girl. My grandmother is Ibo and in Ibo tradition, after school, the next thing for the woman is the kitchen. So I’m a relatively homely girl. But where did I get all the swag and charisma from? First, I’d say from God. When I started acting, I started going out a lot, to events, to nightclubs; and when I’m out there, I try to study people a lot. I see how the town girls behave, how they talk; more especially those with unusual characters.

Have you at any time suffered stigmatisation by people based on certain roles you have played?

Yeah, a lot of that happens. I know I regularly play town-girl, bad babe, armed robber, criminal; and some people unfortunately tend to see me in that light, probably because of my look or because I play it well and maybe because I also have tattoos on me. I know people tend to regard those of us wearing tattoos like, ‘Oh, she has tattoos, so she must be a very baaaaad girl.’ However, when they have the opportunity of getting close to me, the equation usually changes and the next thing is ‘Iyabo, are you always this quiet?’

Your latest film, Arinzo, has all the trappings of a blockbuster, what has been the response in the market?

It’s been wonderful. Even up till this moment, I keep getting messages from my fans and they’re just loving it. The good news is that the concluding part is going to be out this September and I’m sure they can’t wait to see it. This is the first time I’m dividing my films into two, which is a way of combating the piracy menace; but I’m glad they’re looking beyond that.

Aside Arinzo, what other films have you produced?

I have Tembelu. It’s the first old school comedy in Yoruba. The promo is already out; but we want the concluding part of Arinzo to hit the market before we release it. And there is Enu Orofo which I shot for Gbeminiyi Adegbola, who has been my P. A. for over nine years. She’s the producer, but I am the executive producer. Of course, I have talked about Omo Gomina. Timbale is in the studio, as we speak, and once that is out, I’ll be going on location again to shoot another movie.

What were the challenges making that movie, considering that it is a Yoruba movie, shot mainly in Ghana and featuring some Ghanaian acts as well?

What I do usually before I go into any production is plan ahead. It took me a year before I got myself ready to shoot Arinzo, going back and forth to Ghana to get the right person to stand for me and co-ordinate activities. And once I got that person, she took charge and made sure all logistics worked well for a smooth shooting. However, it was capital-intensive, but because we had planned it ahead, it wasn’t outrightly difficult to accomplish.

When you shoot a film outside Nigeria, do you have to pay some kind of fee or you just move in and shoot?

Of course we pay, like when I went to shoot the film Omo Gomina in South Africa. I also had a co-ordinator on ground, who took care of all the fees, while I just made the fund available. In Ghana, we had to pay for the fact that we were coming to shoot in the country. We also paid for the airport that we used in the film; we paid for the police because we used real policemen and their vans and their guns. We even had to fill a form; we had to send a letter ahead, even to the university that we used, for approval – the university didn’t take a dime.

Tell us of the challenges of being an actress?

The major challenge that comes with being an actress is that people tend to have a different opinion about you based on what they watch. Aside that, a lot of people want to be your friend, or want you to be their mentor. And if you don’t respond the way they want – because you can’t respond accordingly to everybody’s expectation – it becomes a problem. There is also the part where people violate your privacy and write a lot of things about you that may or may not be true. Apart from these, being an actress is just an interesting experience. It can be very tasking and strenuous but you learn to manage that.

Nollywood is replete with cases of broken marriages, and here you are too, a single mother who was once married….

I wasn’t even a star when I got married. And when I got out of my marriage, I still wasn’t a star. Up until I got married, I’d only featured in one film, Satanic, and I pulled out of the industry the moment I got married. So I wasn’t acting in those years that I was married. I was a full-time housewife and businesswoman. And so if I had problems with my marriage, it had nothing to do with my acting profession. I actually chose to come back into acting because I had started having issues with my marriage and knew it wasn’t making me happy.

And I knew that wasn’t the way I wanted to live my life. Yes, there are lots of problems in celebrity marriages; and the reason is that as celebrities, we live in our own world. We work hard a lot, moving from one location to the other; and usually when a female in the industry meets a male guy who just comes from the blues, he usually comes with a lot of loaded lies and sweeps some of these colleagues of mine off their feet. And they in turn are not patient enough to study these guys well enough, because ‘society expects them to be married.’


So people tend to marry for specific reasons, and as far as I am concerned, you mustn’t be able to define the reason you love someone to the extent of marriage. Once you get married for a reason, then there is a problem. I got married because I was pregnant. That was a reason. My husband married me because I was pregnant for him. That was also a reason. Most men get married to ladies in the industry because of the celebrity aura around them, only to realise that there is a lot to marriage than that. They also discover that in reality, these ladies aren’t as perfect as the screens project them.

And then the men cannot get used to the ego that comes with the profession and typically want to be the man and break those wings. And if the woman is such that wouldn’t be tamed, then there is a crisis and a collision.

Piracy continues to be a problem in Nigeria. As a major player, how do you view the menace?

It’s annoying. It’s frustrating. You know Arinzo came out on a Monday; now by Tuesday the following day, a friend of mine went to the market and bought a pirated copy. Now, the CD didn’t just contain Arinzo alone, but two other films were added and sold at a hundred naira. It’s that bad. Now some of us want to shoot good movie, but when you spend so much money on a film and you don’t make that money back, then you get discouraged. And that’s why we keep saying that the government need to set up a task force with a primary responsibility of dealing with this menace, just as they have KAI Brigade dealing with people who cross the highways.

FESPRIS is a combination of my two children, Festus and Priscilla. It opened officially on August 11, 2013 and it’s basically a beauty clinic where we have a spa, do scrub, facials; we also have the salon where you do your hair, nail studio for nails, manicure and pedicure; the tattoo section, where you can have your tattoos and piercing. I also have my office here from where I run my business, because I’m also into events management. I have ushers, I have models and I also do bridal beads, bridal make-up; and cakes of all sorts.
Posted by Unknown at 00:16