Why is Jonathan Not Looking Into Obama's Eyes As A Man? 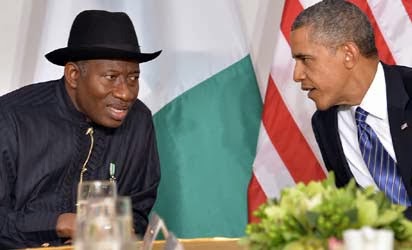 President Goodluck Jonathan's meeting with President Barrack Obama in the US on television, I was embarrassed as it was obvious Jonathan was struggling, again.

I thought I was the only one who noticed until I saw this piece by Mr. Tunde Fagbenle on the same issue. It is sure an interesting read:  "Eyeball To Eyeball Please, Mr. President"

The photograph splashed on the front page of virtually all Nigerian newspapers of Tuesday, September 24, was of our President, Dr. Goodluck Jonathan, finally in a one-on-one with America’s President, Barak Obama. I say ‘finally’ because it is probably the first such opportunity for a private tête-à-tête between the two — something, from all indications, the Nigerian presidency had long longed for.

But it wasn’t a flattering photograph at all. There was President Jonathan obviously avoiding eye contact with Barak Obama who was looking directly into the eyes of Jonathan.

I didn’t like it at all. The message, the body language, was unwholesome. In the American culture, it says of only one thing: you are a shifty guy.


However, I can’t knock President Jonathan too hard. The fault is not entirely his. His handlers must bear some of the blame, unless, of course, they prepared him and he just “forgot”! The business of international relations, especially at such high diplomatic level, is a tough and dicey one. Those playing the host are as groomed as those visiting, but the onus is more on the visiting dignitaries to know and respect the norms and culture of the host.

Eyeball to eyeball is a delicate thing. In our Nigerian culture (if one can be permitted to assume one) looking directly into someone’s eyes, especially an elder or boss, is viewed as rude and confrontational. And we grow up generally accustomed to avoiding eye contact as a form of politeness. It is unfortunate because in Europe and America the interpretation is the exact opposite. Eye contact is the rule; making eye contact is interpreted as showing interest, paying attention, and a sign of self-confidence.

But if it makes us feel good, America had their own horror of seeing their president (Obama) bowing to greet Japanese Emperor Akihito when Obama visited Japan in November 2009. Americans called it a “treasonous” bow. For them it was tantamount to treason for an American president to bow (damn diplomatic etiquette) to any other human being! That was an instance of carrying ‘respect of the host’s culture’ one bow too far!

I must admit that, other than his elocution, Dr. Jonathan is lately showing some signs of maturing somewhat into the dignity required of the office. But, please, President Jonathan, these things – body language, et al – are important. You are our President and presidential we want you to look – and talk!
BY TUNDE FAGBENLE
Posted by Unknown at 22:11