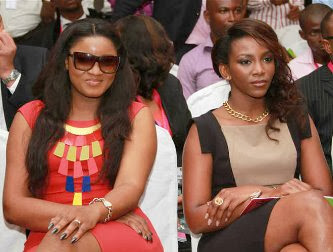 Four elements contribute to the success of a movie at the box-office. They include good script, experienced director, professional publicist, and most importantly, the big name stars.

Of all the four, there is one a producer should never violate at the market place and that is the ‘star’ aspect of it. There could be a bad script, inexperienced director and not too good publicity for the movie but it is almost impossible to have Return On Investment (ROI) with un-bankable stars.

This year alone, no actress has made as much as N24 million from a single movie; Funke Akindele would have done so with The Return of Jenifa but the movie hit the box office in 2011.

Omotola, who was reported to have been paid N5 million by Tarila Thompson all in the bid to make his movie a blockbuster, has been described as the biggest box office actress of 2012. She recorded successes back to back but it remains to be seen if she can pull off the box office magic again with Amina and other movies coming in 2013.

Omotola has been an A-list actress even before Genevieve got her first big break and so what has been working for her is the wise investment in her brand. Her enduring presence and unceasing contact with her fans via the social media has made her popular even in an environment where a mother of four like her is not fashionable.

Genevieve Nnaji:
Next is Genevieve Nnaji. Love or hate her, Genny as she is fondly called, has a way with cinema audiences that make them come back again and again for her movies.

So far, Genevieve’s starring in the movies has grossed over N83 million at the box office. Mirror Boy (described by the actress as her first major film and the first to put her at the box-office) made N18 million, while Ije netted N60 million turning out to be Nigeria’s highest grossing movie ever. But Genevieve had to share the money with Omotola, who also acted alongside her. If the sharing formula is 50-50, then Genevieve gets N30 million of the total gross.

Genevieve’s next movie, Tango with Me went on to make N35 million. So, putting all the figures together, Genny remains at the head of the pack. What seem to be working for Genevieve are her enduring power, popularity and social media connection. The actress has been there for over a decade and is still waxing stronger. Her wine seems to taste better with age.

Another plus for Genny is her popularity. Genevieve is hugely popular across Africa and most especially among the youths. Before now, she has been very active on the social media especially Twitter. She even had to put up a Facebook advert after reports emerged that some acts were ahead of her there.

Funke Akindele:
Surprisingly, the third person on the list is Funke Akindele, a young lady who rose to fame in I Need To Know, a TV series, and went on to earn a monstrous fame with Jenifa.

Funke is an unlikely candidate on this list. Now, how can one explain that she is third on a list parading heavy weights like Omoni Oboli, Nse Ikpe-Etim and Stephanie Okereke among others?

So far, Funke has made over N56 million, netting over N20 million in 2012 alone. In The Return of Jenifa, Funke netted N35 million. The movie ran till February 2012. Her movie, Married but Living Single made N9.9 million while Maami made N11 million. The actress is on her way to another cinema glory with a movie, A Wish. Let’s hope she will be able to wave the magical wand again and create a box-office success.

For Funke who recently got married, the plus factor for her is her huge popularity among the masses and elites. Her movie, Jenifa cuts across all social groups with the street parlance in it becoming the mode of communication in social gathering. And as an icing on the cake, Funke has moved upscale, she is now the toast of events organized by the rich and not so rich. Her box office credibility transcends the cinema as all DVDs parading her face turn into gold.

Omoni Oboli:
Omoni Oboli, who is still largely unknown to those who don’t patronise the cinema and social media, is fourth on the list. She is a silent achiever. Before the trio of Genevieve, Omotola and Funke even dreamt of hitting the box office, Omoni Oboli already took the lead. Figurine, her first box office appearance made N13 million while her second effort, Anchor Baby made N18 million bringing her total earning to N31million.

Omoni’s strength is her exclusivity and knack for quality. It is a known fact that if the project is not big and ambitious, Omoni might not do it. The disadvantage of that is, despite her box office credibility, Omoni is still unknown in areas where there is no access to cinemas. Perhaps, that is the reason she tries to make up with the red carpet presence.

For now, the exclusivity is working for Omoni; perhaps her new movie, Broken and other works will introduce a new twist. One other thing that should not be forgotten is the unprecedented publicity of Anchor Baby in 2010. The film also had Omoni at the forefront of meeting and greeting of fans at the cinemas.

Nse Ikpe-Etim:
The fifth slot belongs to Nse Ikpe-Etim. She seems to be the latest sensation in big budget movies. In Mr and Mrs, Nse was a delight, her performance was a reference point and it was a hook that kept drawing people to the cinema while the movie was there.

Mr and Mrs made N6 million while another of her film, Phone Swap made N20 million, making a total of N26 million.

Too early for Nse to cement her place, as she hasn’t done N15 million back-to-back but one thing the actress has made clear is that she has intention of doing that. The leading four acts should be afraid of Nse because her strength lies in her pure acting talent.

Nse is born to act, deemed to be unnecessarily assertive a times, but you can’t accuse her of not knowing her lines. And she pushes her movies with virgour, moving from one cinema to the other.

However, Nse should watch it as many have accused her of being too ‘self-conscious’, a term casually used for budding stars who have ‘over-hyped’ impression of themselves as this could alienate fans who make the box-office count.

Of course, there are exceptions to the rules. A bankable star makes easier the job of a producer; the absence of one, however, is not a ready-made doom for a movie as Avatar and Slumdog Millionaire (both global box office hits) have shown. But if one would take a risk or err, it’s better to err on the part of caution.


Wikipedia defines a bankable star to be an actor famous or charismatic enough to be “capable of guaranteeing box-office success simply by showing up in a movie”. It is common knowledge that a Will Smith will sell any movie no matter how bad as long as he has his face on the jacket.

In Nigeria, some movie stars have proven again and again that they can guarantee return on investment as long as their faces adorn the poster. They are Omotola Jalade-Ekeinde, Genevieve Nnaji, Omoni Oboli, Funke Akindele and Nse Ikpe-Etim.