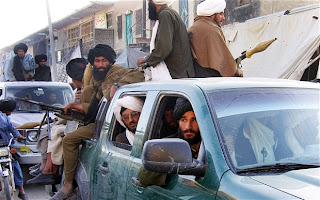 Taliban militants beheaded 15 men and two women for holding a late night party with music and dancing, according to Afghan officials.

Their bodies were found in a house in the Musa Qala district of Helmand province in an area under almost complete Taliban control.

Afghan officials said shooting had been heard at the scene and the victims may have been shot first, but because of insecurity in the area they were finding it difficult to investigate what had happened.

Nematullah Khan, governor of Musa Qala, said the Taliban had tried to stop the party and then had killed a number of guests. He said: "They were having a music party and the Taliban came and killed them and cut off their heads."

The killings happened near Zamindawar village, an area on the border between Kajaki and Musa Qala districts of Afghanistan.

There was no immediate claim of responsibility from the Taliban

Daud Ahmadi, spokesman for the provincial governor, said the investigation was being hampered by the insurgent domination of the area and a lack of telephone reception.

He said: "All I can tell you at the moment is that all of them were beheaded. The people were all civilians. Almost all of the control in that area is with the Taliban."

He said it was not clear what the party was celebrating. Parties are usually strictly segregated in Afghanistan, with men and women prevented from mixing unless they are related.

Two months ago militants stormed a popular restaurant at a Kabul beauty spot which they claimed was a den of prostitution and drinking.

Mr Ahmadi said that also on Sunday night 10 Afghan soldiers were killed in the same province after they were apparently betrayed to the Taliban by some of their comrades, he said.

Their outpost was attacked and 10 were shot dead while four were badly wounded, he said. Five other soldiers were missing, and there was suspicion they had helped the Taliban overrun the post, Mr Ahmadi said.
Posted by Unknown at 13:14